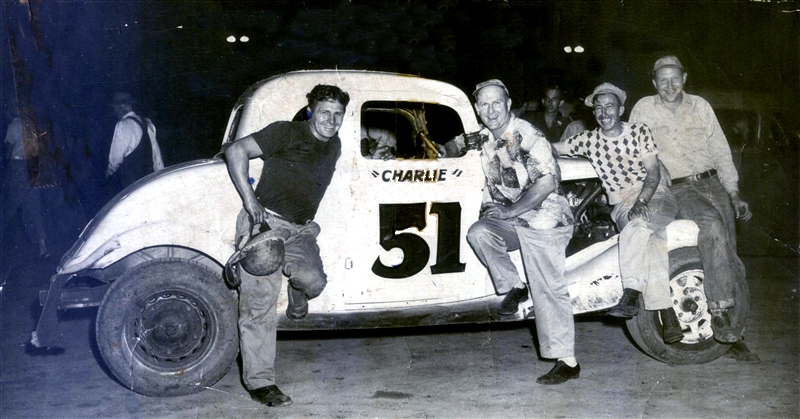 Charlie Lutkie at left with car owner Bob Moffitt after sweeping the evening's racing program at Cejay Stadium in Wichita in October of 1951.  The men at right are unidentified.  This is the same Ford coupe that Lutkie drove to victory in the feature race at Winfield, Kansas on August 30, 1951 – Anthony Miller collection

Charlie Lutkie of Wichita, Kansas is pictured above with a yellow over dark blue 1934 Ford flathead V-8, five-window-coupe that he drove for car owner Joe Collins of Winfield, Kansas.  Note the victory flags painted on the dented roof of the car.

While presenting races on the Winfield racetrack in the early 1970s, I stopped by Lutkie's home to personally invite him to participate in the next scheduled racing program.  I apologized for not being able to convince the City of Winfield to remove the steel pipe guard railing from around the racetrack but Lutkie told me, "Don't worry about it.  If you run into that, you're where you shouldn't be anyway."

Lutkie told me in April 2000 that he did not believe he missed any races at Winfield after running there his first time in 1950.  When asked what he thought of the Winfield racetrack, Lutkie said, "I liked it, but then, I never raced on a bad track.  Racetracks are like women.  Some are better than others but none of them are bad.  You have to race with the racetrack, not against it.  It's like being in a fight.  You have to fight with your opponent, not against him." – Photo from the Willard Bodkins collection

Return to page 1 of the History of Auto Racing at Winfield website.