Wichita’s three-night program auto racing will get under way Thursday night at 8:30 at the Stearns Racing Track 12 miles north of the city.  Already an impressive entry list has been compiled and with additional entries coming in with every mail, it is a certainty that some of the finest speed tests both of stock car models and professional models ever shown on a dirt track will be seen here.

Among the entries already listed are Jimmy Davis of San Antonio, Tex. who holds the track record for every motor track in Texas and Oklahoma, and Matt Ward of Duncan, Okla. who will attempt shortly to break Cannonball Baker’s transcontinental record of 69 hours and 31 minutes from New York to Los Angeles.  He hopes to set a mark of 66 hours or less.

Coming back after a lapse of almost 15 years, automobile racing will make another debut in Wichita Thursday evening as the first of a three-night meet at he “Bo” Stearns farm 12 miles north of Wichita on Lawrence.

Officials of the meet are more than enthused over the entry list which is swelling with every mail and indications are now that some of the countries finest professional drivers will be on the track.

The meet is officially sanctioned by the American Automobile Association and all marks made will be accepted by that body.

One of the featured drivers entered in the meet is Lawrence Hughes of Beatrice, Neb. Recently won the 100-mile non-stop race at Omaha.  He will drive a Chrysler 75 roadster in the stock car races and is being picked by experts as one of the favorites for high honors.

Another fast driver entered is Matt Ward of Duncan, Okla. who will use a Model A Ford in the stock car races.  Ward announced that he is going to break Cannonball Baker’s transcendental record shortly after the Wichita race.

The meet is the first which has ever been held under the floodlights in this section of the country and the eyes of the racing world will undoubtedly be focused upon the Wichita race.

The rain on Monday evening is expected to put the track in perfect condition and officials have promised a dustless track.

The races will be held under the powerful flood lights which made the night horse racing recently such a success.  A dustless track is promised.  Sprinklers will work all day and oiling will be resorted to in addition to keep down this feature which was the chief annoyance during the horse racing.

Following is a tentative program for Thursday night:

Third race – Special matched race between two Fords and two Chevrolets with a side purse of $1,000

The second night will be the professional night with regulation racing models entered.  Stock models will again be used in the racing on the last night.

With everything in readiness for a successful race meet, the huge floodlight system at the “Bo” Stearns race track 12 miles north Lawrence Avenue will be turned on this evening on the first night automobile races ever to be held in the Southwest.  The meet, which is being sanctioned by the American Automobile Association, is to be a three-night meet starting at 8:30 each evening.  Time trials this evening however will begin an hour earlier.

The ad at left appeared in the

Duncan, Oklahoma Driver Has Bad Hand But Comes In First

Matt Ward, of Duncan, Okla., driving with one hand wrapped in bandages because of blood poisoning, in his special Model A. Ford stock car swept the field in the first night races ever held in Wichita Thursday evening before a small crowd.

Ward started off the big evening by clipping the half-mile track in the fastest trial time and continued his success throughout the evening.

In the Class A race of five miles, Ward took the pole and stayed in the lead throughout the five miles.  The real battle in this particular race was between Jim Davis driving a Hudson, and Jim Arnold’s Chevrolet.  These two jock for second position and it was not until one of the most thrilling races had been finished that Davis managed to flash across the finish line in second place a few feet in front of Arnold in his Chevrolet.

Ward again came in the winner in the special 7½ mile match race between the Ford and Chevrolet.  Matt stayed behind for five miles and then came out in front on the last two miles winning by a good margin.

A Ford captured two events at the night auto races last night at the Stearns track.  As far as the lights were concerned, the races were a success.  Stock models, modified with some extra gee-gaws, ran and no records were broken.1

Matt Ward won the five-mile race with a Hudson of Jim Davis second.  J. Arnold’s Chevrolet won this second race with a Willys second and a DeSoto third.

In the special match race between a Ford and Chevrolet, the Ford dashed in a winner by a nose, or radiator cap, as it might be stated.  The two drivers, Ward and Arnold, jockeyed their steeds back and fourth into the lead for the entire 7½ miles

A Chrysler driven by Hughes won the nest race beating the Hudson and the Ford.  No spills were registered.  The races continue Friday and Saturday. 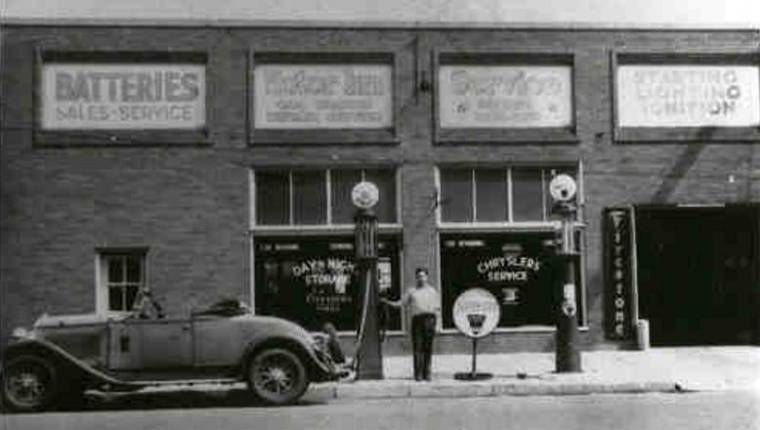 Bo Stearns’ Track sweepstakes winner Lawrence O. “Hughie” Hughes is shown here in front of his garage in Beatrice, Nebraska.  He probably made few alterations to the Chrysler roadster at left when he raced it on dirt racetracks across the Midwest - Ed Hughes collection

1This being the first auto racing program to be run at Bo Stearns’ Track, there had to be a number of track records set.