This race carried AAA sanction number 2385 and was put on by W. W. Bowen and Don C. Onley of San Antonio, Texas under the name of Bowen Auto Races.

Five Race Cars in Crashes in Speedy Events at Night

Thrills in spills were furnished a good-sized crowd which watched the regular racing model cars do their stuff on the second night of the auto races at the Stearns farm track Friday under the floodlights.

Five different cars and drivers took turns in tearing up an entire section of fence at the track.  Of the drivers, only one was seriously injured.  He was “Spec” Heminger who was rushed to the emergency hospital at the track.  He is not in critical condition it was reported last night.

The races were faster and furnished a great deal more excitement than those of the opening night.  The time made was much better and the little racing cars slid around the turns at perilous speed.  Gil Eddie, driving a Frontenac, was injured   Louis Irwin of Arkansas City crashed through a fence in the first race.

The third race was one of the best run off here during the meet.  Pat Cunningham won with his Gallivan and Rae Bray was second in his Frontenac.

The second night of racing drew a crowd estimated at 1,500, much larger than the opening night and the racing was correspondingly better.

The meet winds up tonight with another program of six events featuring mostly stock models with a matched Ford-Chevrolet race as the feature.  A novelty surprise race will be one of the big features.

Spills and thrills, the spectators of speedy racing cars careening madly around breath-taking curves, accidents – at once the dread of every race driver’s existence but the big box office attraction in automobile racing; these and other thrilling sights were the lot of spectators in the second night of racing at the Bo Stearns farm Friday night.

Taking the curves at top speed and dashing around on the straightaway with reckless abandon and an utter disregard for possible injuries, the professional drivers, driving racing models, surpassed anything they city has ever seen in the way of automobile racing.

Thursday night’s program of racing in stock cars did not even hold a candle to Friday night’s events in professional models.  Five spills, three injured drivers, yard after yard of completely demolished fence, the shriek of the ambulance-all combined to give the more than 2,000 fans a maximum in breath taking excitement.

The results of the races were a minor feature of the evening’s program.  Who cared, except for the few moments while the race was being run, who had finished in first position.  The thrills came in watching the drivers jockeying back and forth as they tried, sometimes in vain, to grab the lead, and in the spills and crashes that were sprinkled plentifully throughout the evening’s events.

In the very first race, immediately following the time trials, Louis Irwin of Arkansas City, driving a Frontenac Special, lost control of his car at the south turn and barely avoiding a spill, sent his car crashing through the inside fence at a high rate of speed.  The crash tore out some 20 feet of fence and the speedy little car missed a huge pole on which a floodlight was mounted, by not more than one foot.  Irwin, however, miraculously escaped serious injury.

The other cars continued in the race for a couple of laps when suddenly, without warning, the Frontenac Special driven by Gil Eddie of Arkansas City rolled over after making the north turn and cleared a hole exactly the length of the car through the inside fence, coming to a stop in an upright position on the inside of the track.

Again, drivers’ luck was with the crash victim and Eddy was not seriously injured.  The race was finished and the next event started.  As the cars began gaining speed on the warm-up round of the third event, the Frontenac Special driven by “Spec” Heminger of Wichita locked wheels with one of the other models at the north turn and sent both cars crashing through the outside fence.

After some speedy work by nurses and physicians and with the aid of the ambulance, the announcement was made that Heminger had not been seriously injured and that he had suffered only numerous bruises and lacerations that would not prove dangerous.

In the third race of the evening, a speedy model driven by Littleton and a Model A. Ford steered by Lawrence Hughes of Beatrice, Neb. had been alternating the lead in a race for second place throughout the early part of the 10-lap race.  As they passed the grandstand and neared the curve at the start of the tenth lap, the two cars locked wheels and both went around the curve on two wheels but, in some manner the drivers straightened out their course and Littleton crowded ahead to finish a few feet in front of Hughes.

The big event of the evening, the Bo Stearns sweepstakes for the winners of the first three races resulted in a win for Hughes driving his Model A Ford.  Hughes got away to a bad start in the 25 lap, 12½ mile race but came up from fifth to second place and passed Pat Cunningham of St. Joseph in a Gallivan on the last turn to grab first money.

In Justice to Cunningham, however, it must be stated that he got a bad break.  Rae Bray of Hutchinson blew a tire on his Frontenac and narrowly escaped a crash when his car turned completely around in the middle of the track.  Officials at once waved Cunningham down with the caution signal while Hughes was not forced to slow up and closed up the gap between the two cars. 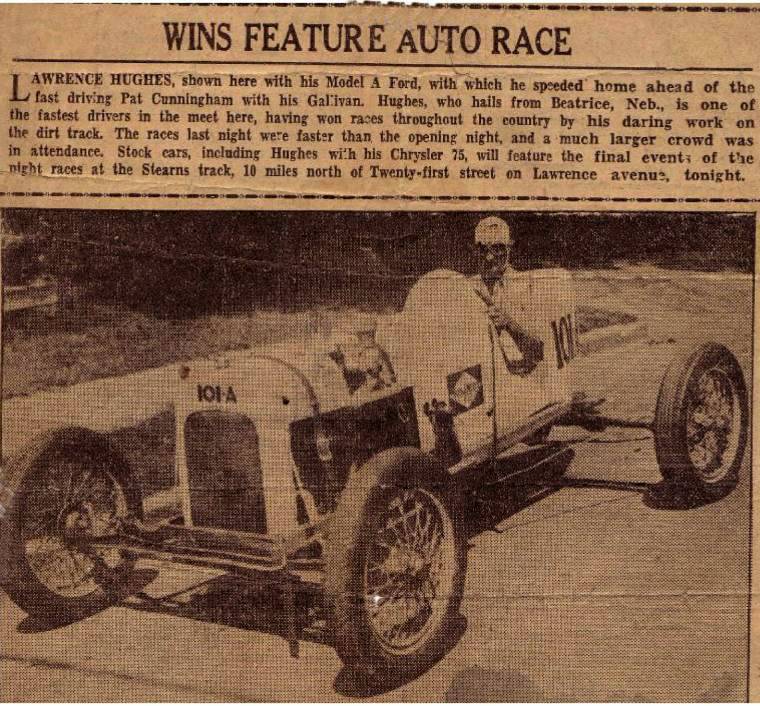