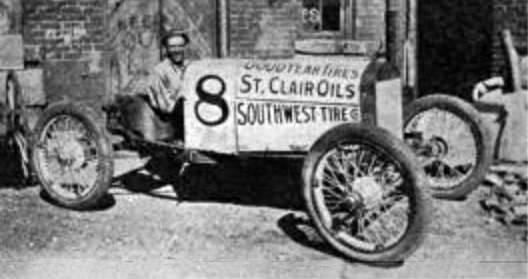 Strong tried his hand at racing automobiles in a stripped-down Model T Ford bobtail racer #8 equipped with a 16-valve Laurel head on a Model T block.  An incomplete list of the races he competed in follows:

Finish:  Strong was 1 of 9 drivers that received no time in time trials for the 22 cars entered in these races.

Strong was 1 of 6 entered in a 10-lap match race for all cars from Reno County, Kansas but he dropped out on the 3rd lap with engine trouble.

Finish:  Strong was entered in these races but did not place in any of them.

Entry:  According to the newspaper accounts, Strong participated in these races under the names “Bud Small” and “Bus Small” which were probably just errors on the part of the newspaper.

Finish:  Strong turned 1-lap in time trials of 1:09.5 which was the fifth fastest of the ten cars that took time trials.

Strong was one of ten drivers to participate in the 50-mile “Free-for-Race” race but he did not place among the first three finishers.

Strong ran in the 7-car, 15-mile Sweepstakes race but he did not finish in any of the top four positions.

Finish:  Strong entered these races but his finishing position is not recorded in the published race results.  Another article about those races in a Newton, Kansas newspaper said that Strong “took a $350 prize in” these races although that claim is doubtful.

These races were postponed until September 8, 1921 so as to not interfere with other activities that were scheduled in Athletic Park on this date.

Strong entered these races but his finishing position is not recorded in the published race results.  The 15-mile Sweepstakes race was won by Harold Peterson of Wichita, Kansas.

Attendance:  Between 1,200 and 1,500, most of which slipped in with purchasing a ticket

Finish:  Strong turned in the 6th fastest time in time trials with a 2-lap time of 1 minute, 16.5 seconds behind Johnny Mais of Indianapolis, Indiana; Johnny Lee of Wichita, Kansas; Harold Peterson of Wichita, Kansas; William M. “Bill” Bryant of Hutchinson, Kansas and James I. “Toots” Higgins of Newton, Kansas but Strong did not place in any of the races run on this day.

The races on this date were canceled by promoter, Fred R. Dunlavy due poor paid attendance numbers the preceding afternoon and there only being about 80 people in the grandstands at race time on this afternoon.

Attendance:  “A big crowd that filled the grandstands witnessed these races.”

Finish:  Strong entered these races but his finishing position is not recorded in the published race results.

Strong worked as a self-employed mechanic at his Easy Terms garage and then as a mechanic for the Keystone garage in Hutchinson.  He also worked as a shoe repairman, was the Hutchinson city dogcatcher from 1928 to 1931 and spent five years on the Hutchinson, Kansas police force.  He graduated from the college of Swedish Massage in Chicago, Illinois through a correspondence course and studied the therapeutic values of herbs and alternative medicines.  In 1939, Strong was one of seven candidates to run for a spot on the Hutchinson Commissioner of Parks and Public Property but claimed he spent no money campaigning for the post.

Bud Strong passed away on November 13, 1952 at Hutchinson, Kansas and is buried by his wives in the Wildmead Cemetery at Nickerson, Kansas.

* Although Johnny Mais listed his home as Indianapolis, Indiana; he was actually residing with his wife at Dodge City, Kansas.