A half-mile dirt oval racetrack located in what had been known as Shuman’s Grove and then Griswold Park, is where the Ralph Wulz Riverside Tennis Center is today in South Riverside park in Wichita, Kansas

The Wichita Board of Trade organized a number of events for the public celebration of Labor Day on Monday, September 1, 1902.  Among those events were races on the half-mile dirt racetrack in South Riverside park in Wichita, Kansas that was known as the Griswold track.*  Bicycle races, pony races, and automobile races were all on the afternoon schedule.  "No less than 12,000" spectators lined the racetrack.  The automobile races were to be open to all comers and consist of three events.  The first two races were qualifying heats with the final to be six-laps long.  $10 cash was put up by the organizers to go to the winner of the 3-mile final event.  The second-place finisher was to receive 50 soda fountain coupons redeemable at the local Dockum-Higginson drug store.

The other scheduled events went off without a hitch on Labor Day but there was only one entrant in the automobile races.  That was believed to have been an 1902 Oldsmobile driven by Morris H. Schollenberger who, with brother George H. Schollenberger, had recently closed their bicycle shop at 230 North Main Street and opened an Oldsmobile dealership known as the Wichita Automobile Company at the corner of Second and Broadway Streets in Wichita.  Their Oldsmobiles were the first gasoline powered automobiles to be sold in Wichita.  While the race organizers pondered what to do about the lack of entries, another brother, Harvey Schollenberger, offered to race his motorcycle** against Morris Schollenberger's Oldsmobile.  Since the motorcycle was much faster than the automobile, Harvey challenged his brother to turn four laps of the racetrack faster than he could run six laps on his motorcycle.  The challenge was accepted at first but then the organizers decided to have both vehicles race for eight laps instead, since there would be only one race rather than three races as had been advertised.  The race began after a pace lap that led to a rather fast rolling start.  The motorcycle jumped out to a big lead turning the first lap in 55 seconds compared to the automobile's 90 second initial lap.  The motorcycle ran the second lap in 53 seconds while the automobile was able to post a time of 75 seconds on its second lap.  The motorcycle lapped the automobile just short of the three-lap mark while the automobile was just completing its second lap.  The motorcycle's time on its third lap was 50 seconds while the automobile posted a time of 70 seconds on its third lap.

By the fourth lap, it had become obvious that the motorcycle would not be able to complete six laps before the automobile completed four as had been originally proposed.  The motorcycle maintained its speed through the fourth lap but started to slow on the fifth lap when the drive-belt became overheated and began to slip.  The timekeeper missed the automobile's time on laps four and five but caught the auto with its best time of the afternoon on lap six with a time of 62 seconds and the seventh lap at 65 seconds.  Although the motorcycle had slowed to a crawl, it was still a lap ahead of the Oldsmobile when it dropped out of the race at the beginning of the eighth lap.  The automobile was able to complete the eight-lap distance and Morris Schollenberger was, therefore, declared to be the victor. 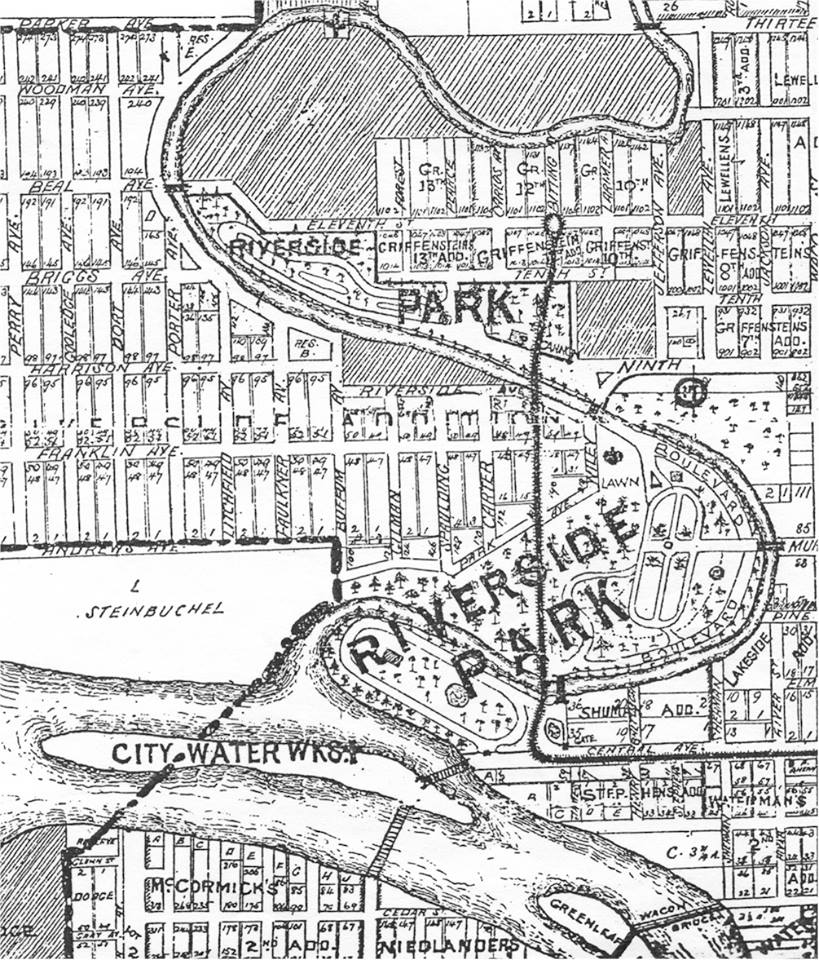 * The ½ mile Griswold Track was originally built as a part of Griswold Park in 1893.  Griswold Park, a forerunner of South Riverside park, had been developed by George Washington Griswold, Sr. (1848-1902).

** Believed to have been either a Mitchell Motor-Bicycle or a Thomas Auto-Bi as both brands of belt-driven motorcycle were being offered for sale by the Shollenberger brothers at that time.