And then Known as

When the racetrack was operating, the directions were, when coming from the north:

"South of Newton, Kansas on Old Main Street to the Dead End and Then Turn West"

or, when coming from the south:

"North on U. S. Highway 81 to Southwest 14th Street South of Newton, Kansas and Then Turn West"

If it were there today, its current address would be:

or on the corner of Southwest 14th Street and Elm Street in Newton, Kansas

A group of Newton, Kansas businessmen including Charlsen's Fruit Market owner George B. Charlsen (1889-1956), Hogan's Variety Store owner Morris A. Hogan (1910-1977), Godsoe's Paper Office owner James Edward "Eddie" Godsoe, Jr. (1904-1984) and Bill's Used Cars owner William "Bill" Spradlin invested in a dream by Earl E. Mills' (1907-1990) to build a racetrack at Newton for auto racing.  Mills and Emory "Lum" Spangler built what became the Jayhawk Amusement Park Racetrack then south of Newton in 1948.  The original configuration consisted of a 1/5 mile dirt oval for midgets surrounded by a 1/2 mile dirt oval for hot rods and jalopies.  The first races were held there on May 9, 1948 with 26 cars on hand.  Morris Hogan was the race announcer, but it was not long before Mills bought out the investors in the venture, formed Mills Enterprise Inc., and began making other changes.  The 1/5 mile oval was removed as it had become clear that there would not be enough midgets to put on a decent program.  The 1/2 mile oval saw shortened to a 1/3 mile oval racetrack in an attempt to make the races more competitive and the name was shortened to Jayhawk Speedway.

In the beginning, Mills' races primarily of hot rods (a.k.a. track roadsters) with a few midget and "strictly stock" car races included on the schedule.  Ernie Powell of Hutchinson, Kansas assumed the promotional duties in July of 1950 and ran "strictly stock" cars for the rest of the season.  In 1951, Powell and Paul Hainke, of Hutchinson, formed the Midwest Racing Association and leased the facilities from Mills.  Hainke began promoting open competition stock car races at the track and then tried putting on races with hot rods and midgets competing against each other in the same races since there was a car shortage in both of those classes of cars by that time.  Racing ceased there in May though with Hainke citing poor attendance and several rainouts as reasons why.  Hainke had the track leased for the entire year so it sat silent for the remainder of 1951.

In the spring of 1952, Mills shortened the name of the facility to Jayhawk Speedway, hired a Charlie Sharp as the new race announcer, and raced strictly stock cars there that year.  Under Mills' promotion, the weekly spectator count swelled to over 2,000, Mills began paying record purses, and the field of competitors began to steadily increase.  Stock car racing continued pretty much unchanged at Jayhawk Speedway until 1956 when the weekly crowds began to drop off.  Fewer people in the grandstands meant smaller purses and that started affecting car counts.  An engine rule change, allowing more modifications, and a change in race night to Thursdays in 1957 did not turn the situation around so Mills closed the facility in August of that year.

This ad appeared on page 12 of the September 9, 1948 issue of the Evening Kansan-Republican newspaper at Newton, Kansas.

Track championships were not awarded at this racetrack before 1950 or after 1956. 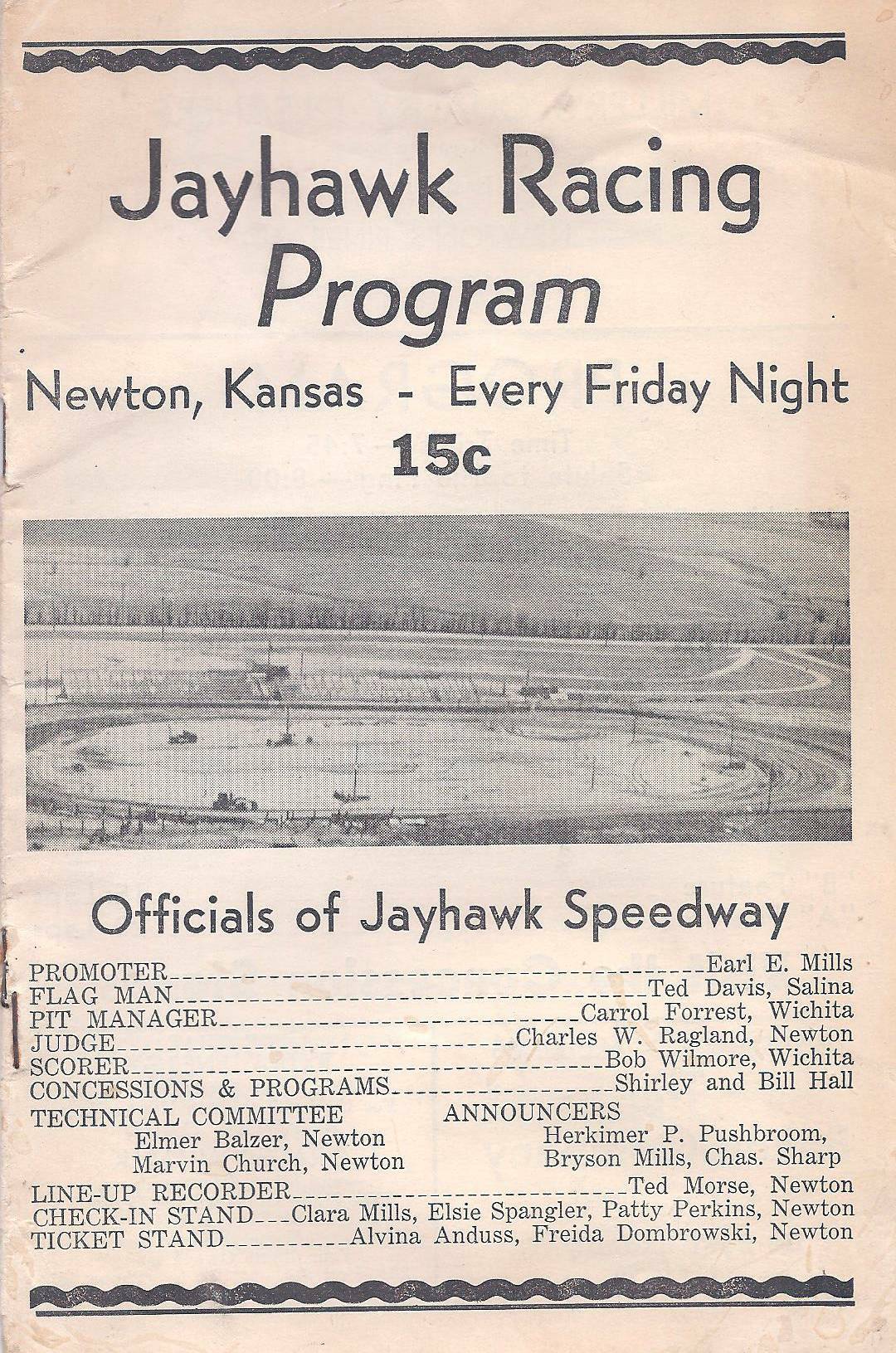 This is a copy of the front cover of a racing program that was sold at Jayhawk Speedway in 1956.  The picture of the racetrack is an aerial view that was taken looking south.  Notice that one of the announcers was Herkimer P. Pushbroom which was the radio pseudonym of veteran radio announcer and comedian, Joe Johnson – J. T. Kelso collection

Return to the History of Auto Racing at Newton, Kansas web page