The county seat town will stage Thursday of next week, what is expected to be the best auto races ever seen in Southern Kansas and they promise to draw a big crowd from this city.  A. A. Welt, publicity agent for the races, was here today placing advertising matter and telling the people what they may expect in the way of a program.  There will be all of the thrills that any autoists would care to see and there are many in this section who have not as yet have an opportunity to see auto races of this capacity.  Some of the best drivers in the field of sport today will take part in the event and the county seat town promises to be a Mecca of excitement on May 13.

The auto races were late starting but were in progress at 4 o'clock when the News went to press.

About two thousand people attended the motor races at the Fair Grounds Thursday afternoon, probably half of them in automobiles.  Weather and track conditions were ideal but the time made in the automobile races and motorcycle event was slow and the races lacked interest. Sig Haugdahl, in a Mercer, romped away from his four competitors with ease and wasn’t pushed at any time in any of the races.  Floyd Willard’s little Ford Red Devil was favorite with the crowd and the spectators were sorry when it was compelled to drop out later in the afternoon by reason of “shot bearing.”

Will Swain, a former local boy, driving a big National, should have been a real contender for first money, but faulty water and oil circulation kept him from finishing in each of the races though he worked hard trying to put his car in shape.  He was not familiar with the car, never having driven it before yesterday.  His many Winfield friends wanted to see him win.

Another disappointment for the crowd was Glenn Breed’s failure to appear.  This was said to have been due to his inability to get his car in shape for the races.

The first event was a five-mile motorcycle race with eight starters.  Walter Higley, of Coffeyville, driving an Excelsior twin won handily in 6:39.  Garst of Wichita on a Harley-Davidson was second and Roy Rinehart of Arkansas City on an Indian was third.

Ray Weishaar, champion motorcyclist of Kansas, rode an exhibition mile against time, but made poor time, 1:14 3/5 for the mile.

In the ten-mile automobile race, five cars started.  Haugdahl, in a Mercer, Willard in a Ford Red Devil, Swain in a National, Rigby in a Flanders, Wilson in a Wilson special.   Haugdahl won easily in 15.31 ¼.  Willard was second and Rigby third.

The Australian Pursuit Race was won by Haugdahl with Willard second and Wilson third.

The twenty-mile race also was taken by the Mercer.  Rigby* finished second and Wilson third.  The Ford and National were laid out by mechanical trouble in this race.  The time was 29:14.

While the crowd appeared much larger, the total receipts are said to have been less than a thousand dollars and the promoters state they lost money on the day of racing.

A piston broke in Willard’s Ford special on the second lap forcing him to drop out of this race.

Sigurd Olson "Sig" Haugdahl (1891-1970) was a Norwegian immigrant who made his home at Albert Lea, Minnesota.

The Mercer automobile was so named as it was built in Trenton, Mercer County, New Jersey.

Arthur Thurman, driving his own Duesenberg, crashed on the forty-fourth lap of the 1919 Indianapolis "500" and was fatally injured.

Raymond Roy Rinehart, born in 1885 at Arkansas City, Kansas, was one of the few men to race both motorcycles and cars on the half-mile racetrack at Winfield.  He moved to Blackwell, Oklahoma in 1933 and passed away there in 1968.  Roy's body is interred in the Riverview Mausoleum in Riverview Cemetery on the north edge of Arkansas City.

Sig Haugdahl behind the wheel of the Mercer Raceabout that he drove to victory at Winfield, Kansas on May 13, 1915.  Haugdahl still holds the 40-lap track record at Winfield that he set in this car on that date.  Click your mouse on the photograph above to see a different photo of Haugdahl in this same car - Sigurd W. Haugdahl collection 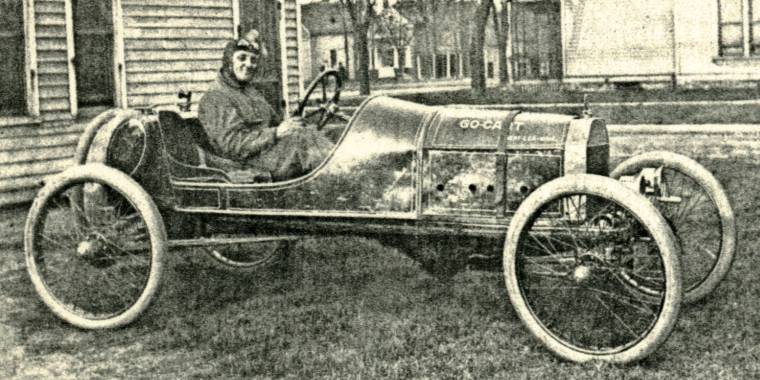 Floyd L. Willard of Albert Lee, Minnesota raced his “Go-Cart” at Winfield on this date but a “shot bearing” ended his afternoon early - Sig Haugdahl collection 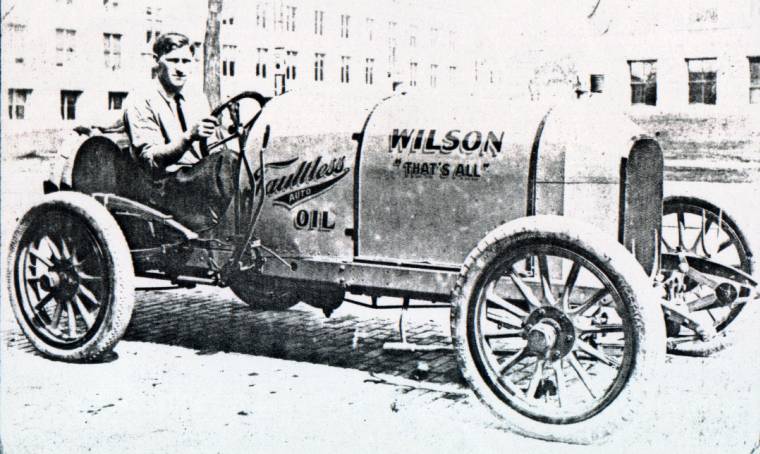 * The May 14, 1915 issue of the Winfield Daily Courier reported that “Rigby” finished second in a Flanders automobile in the 20-mile race run at Winfield on this afternoon while the Chanute (Kansas) Daily Tribune reported on its front page that second place in that race was taken by Roy Good** who was driving a 1910 Flanders 20 owned by J. F. Jersezy of Chanute, Kansas.  The Winfield Daily Free Press, of that same date, says in an article on page on the front page of their publication that the second-place finisher was Elmer Good.  The Coffeyville Daily Journal says that Roy Good not only ran second in that race, but that he also finished first in another race on this afternoon.  The stories in all four newspapers agree that the winner of the event was a Mercer which was being driven by Sig Haugdahl of Albert Lea, Minnesota.

Return to page one of the History of Auto Racing at Winfield, Kansas