Nearly 60 cars are expected to be roaring around the track at the Fairgrounds Sunday when it's turned into a speedway for the V.F.W. Sports Car Races.

Forty drivers are expected to come from Wichita with others from Bartlesville, Enid, Blackwell, Oklahoma, and one car from Winfield sponsored by Phillips' Salvage Yard will be driven by Kenneth Moore.

Several of the Wichita competitors have been vying for the lead of the semi-late model point standings as the north Wichita track.  The three at the top, at the present time are Pinky Mullens, Gary Vogt, and Bud Haehn.

WICHITA, KS – The new Auto Racing Association of Kansas (ARAK) will hold its first sanctioned race Sunday, July 23, at Winfield, Kansas at the Winfield Fairgrounds.  The race is sponsored by the Spencer-Yarbrough V.F.W. Post of Winfield, Kansas.

First race starts at 2:30 p.m. and will feature late model stocks.  For further information, contact the president of ARAK, Dale Chase of Wichita, Kansas.  Cars are expected from Kansas, Oklahoma, and other Midwest areas.

ARAK was organized during mid-season of 1966 and is comprised of late model stocks at the present time with future plans for other divisions.

Before the Races Started
Eventual A feature winner Bob Reed is shown here warming up his 1958 Ford stock car through the first turn before the start of the racing program on July 23, 1967.  It had been nine years since cars had raced on the Cowley County Fairgrounds race track and apparently no one remembered that this race track required a lot of water.  Not nearly enough was applied to the racing surface which caused very dusty racing conditions - Bob Reed collection 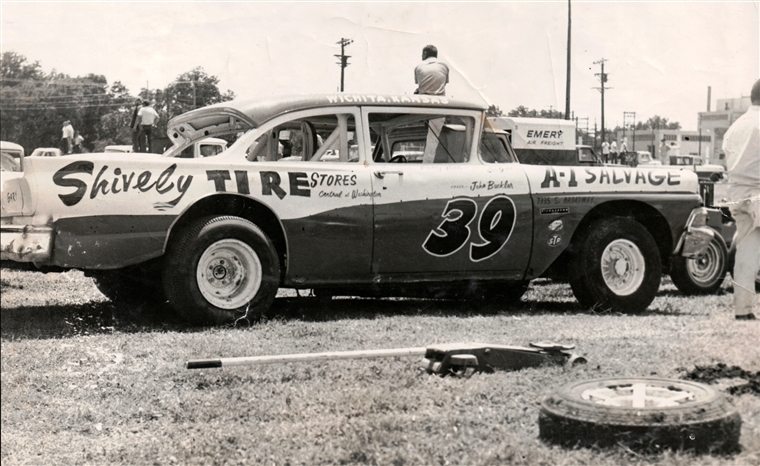 This photo of the John-Buckler-owned 1958 Ford driven by Buddy Hill, was taken in the infield pit area at Winfield.  Buddy won the third heat race, finished second in the trophy dash, and won the third semi-final race before being involved in a crash in the A feature - Mike Cornelison photo

Trophy Dash Winner
Pinky Mullens excepting the trophies after the trophy dash at Winfield, Kansas on July 23, 1967.  Pictured left to right are Dusty Cloud, Mullens, Charlie Terpening, and Dale Chase.  The #4x Ford driven by Bill Swoyer of Wichita, Kansas can be seen in the background at left - Ron Cyr photo from the Pinky Mullens collection

Click your mouse on the photo above to see another photo of these men that was taken by Jerry Leep at nearly the same time this one was.

32 year-old Bob Reed (center) of Wichita, Kansas took third place in the second semi-feature race at Winfield, Kansas on July 23, 1967.  He then started inside of the second row in the "A" feature.  Reed took the lead going into the first turn on the first lap of that race and led the rest of the way.  His total share of the purse that day came to $65.

This picture was taken on the racetrack in front of the grandstand after Reed won the "A" feature that day.  Left to right are: pit crewman Arnold Stoner, Bob Reed, and pit crewman Joe Nedeau.  Reed's 1958 Ford was sponsored by Lyle's Seneca Sinclair service station in Wichita and was powered by a 352 cubic inch Ford engine.

Click your mouse on the photo above to see a photo of Bob Reed with starter Al Alexander immediately after Reed won this "A" feature.

36 stock cars raced this day.  Starting positions in the heat races were determined by a random draw.  Results:

Racing Action from the Second Semi-final Race
Bob Reed, in the #29 Ford, is shown here leading Kenny Myers in the #8x Oldsmobile down the front straight-away at Winfield.  Jim Grantham is following in the #91 Chevrolet.  Reed finished in third place while Grantham got by Meyers to finish in fourth.  The Oldsmobile completed the race in fifth place.  The dark colored car with the white rear wheel that can be seen parked on the right side of this photo across the rodeo arena and next to the arena fence, is the #4 Ford that was driven by Bob Lawrence - Jerry Leep photo

Aftermath of a Wreck in the Third Semi-final Race

Al Jones suffered a couple of broken ribs when he spun his #7 Chevrolet in the first turn and was struck broadside by the Fords of Bud Haehn, Bill Swoyer, and Roy Andrews.  That is Bill Swoyer standing at right and you can see his #4x Ford behind him.  Click your mouse on the photo above to see picture of this #7 car on the infield of the Winfield race track before this race - Jerry Leep photo

Lining up for A Feature

#8x Ken Myers is shown here lining up behind the #87 Chevrolet driven by eventual race winner Gordon Dodson.  The front of the #72 Ford driven by Bud Haehn is visible straight across the rodeo arena from the left side of Myers’ windshield opening.  The blue #4 Ford driven by Bob Lawrence can be seen as the first car from the left in the first row of cars in the pits next to the fence across the rodeo arena from where this photo was taken.  Lawrence’s car had suffered a blown engine in the first heat race – Ken Myers collection

Lining Up to Start the A Feature

#14 Gary Beyer, #92 Ron Frame, #12 Don Jones, #65 Dick Unger, #49 Roy Andrews, and #87 Gordon Dodson.  Note the #02 of Pinky Mullens and the #20 of Gary Moore already loaded on trucks on the infield.  Both drivers withdrew after the trophy dash feeling the race track was too dusty to compete on safely - Jerry Leep photo

Pulling Away to Start the A Feature

Don Jones of Bartlesville, Oklahoma was in the 1955 Chevrolet #12 and Ron Frame of Mulvane, Kansas drove the #92 Ford.  Frame dropped out of the race feeling the racetrack was too dusty to see where he was going.  Jones was involved in a wreck with the #39 Ford of Buddy Hill which eliminating Hill from the race but Jones recovered to finish in fourth place - Jerry Leep photo

The Very Dusty A Feature

The only cars identified so far in this photo are the #29 Ford driven by Bob Reed in first place, the yellow #8x Oldsmobile driven by Ken Myers in second place, and the orange and white #39 Ford driven by Buddy Hill just visible through the dust in front of the grandstands.  If you can identify any of the other mostly obscured by the dust, please contact Bob Lawrence at sprintguy @ cox.net    The trees in the background are in what was known as the “Pecan Grove”.  Click your mouse on the photo above to see a copy of the original print of this photo that was taken before it was leveled and cropped here – Both photographs from the Ken Myers collection

Return to page 2 of the History of Auto Racing at Winfield website.