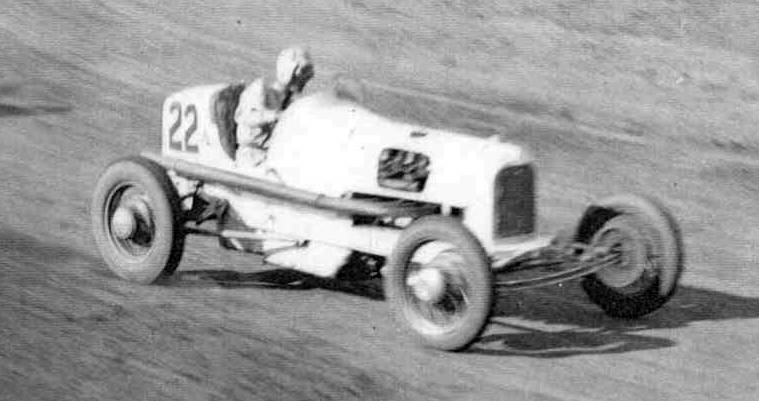 Tex West of Dallas, Texas is shown here at speed in his Model-A Ford Riley #22A.  This is the car that he won the feature race in at Winfield, Kansas on this day – Photo from the Jeff Adams collection and published in the book, “Valley County Thunder, The History of Racing at Ord, Nebraska” by V. Ray Valasek and Bob Mays

Joe Ziobro of Wichita, manager of Saturday's auto races here, said today that some of the fastest speed demons of the Southwest are ready for the starting of the day’s fests.  Speed trials will begin at 1:30 p.m.  There will be five events on the program.

A dozen drivers are expected to be on hand.  So far, the following men have arrived for the races:

Ill luck dogged the drivers in the automobile races at the fairgrounds this afternoon and before the races were well under way, one driver was in Newton Memorial hospital, another was being given emergency treatment in a doctor's office downtown, and a third was figuring up the damage to his automobile and nursing minor cuts and bruises received when his speeding automobile tore through both the inside and outside fences at the race track.

Automobile racing fans numbering about 1,500 at the fairgrounds Saturday, were given their first thrill of the afternoon when C.E. Hamilton of Topeka, a new driver, crashed into the outside fence at the south turn, ripped out a rod of railing, and thudded against an elm tree.  He was not unconscious (sic) when lifted from the wreckage and placed into the ambulance.

Hamilton is in Newton Memorial hospital suffering with several broken bones in the face.  The exact nature of these fractures is not known.  He has a sprained ankle and is cut and bruised about the head, face, and chest.

Dutch Dorris of Dallas, Texas suffered painful injuries, the extent of which had not been determined at press time, when his automobile, a Riley Special, crashed into the fence and turned over at the south end of the track, just east of the grandstand.  He was rushed to a doctor's office for attention.  His automobile was demolished.

The third accident within a few minutes occurred at the north end of the racetrack when John Holland of Dallas, hit the inside fence while traveling at high speed and then careened across the track to take out a span of the outside fence.  His car was damaged to the estimated extend of $300 but Holland escaped with only minor injuries.  The car was considerably damaged.  The left front wheel was yanked back about midway of the machine and the cross member to which the wheel was fastened, was torn loose from the frame.

Was Starting on Trial

Hamilton was just starting out on his time trial when the accident happened.  The crash occurred about a rod from a group of spectators standing on the Frisco railway right-of-way.

At press time, the best time in the trials was 29.70 seconds for the half-mile which is a little over 60 miles per hour.

Time Trials - 14 cars were on hand but only 7 had taken a time trial when these times were recorded.  The rest were yet to run:

Topeka Man Improving in Hospital after His Car Tears Down Fence

Glen Denison of Topeka, who received several fractures of bones in his face and numerous injuries and bruises Saturday afternoon when his car crashed into the fence at the auto races, was improving at Newton Memorial hospital where he was taken in an unconscious condition following the accident.

Victims of the three other crashes during the afternoon's events were not so badly injured and were taken to local doctor's offices for treatment and were dismissed at once.  Dutch Dorris of Dallas and Joe Whitmarsh of Topeka received numerous cuts and bruises and John Holland of Dallas was unhurt but his car was practically demolished.  A fifth driver cracked up but was not hurt.

A crowd of about 1,500 was in the large grandstand to witness the numerous thrills and spills at the races.  Some fast time was seen at the track during the afternoon.

The five auto races, run on this afternoon, were the culminating events of Winfield's annual four-day horse racing sweepstakes.

This was a return visit by George Rice Chitwood, Sr. (1912-1988) to the site of his first ever auto race that he had run on this track one year earlier.  Remembering that George was from St. Joseph, Missouri, a racing publicist dubbed George as “Joie” Chitwood and the moniker stuck.  Using that nickname, he went on to race in the Indianapolis "500" seven times and toured the country with his own automobile "Thrill Show".

The “?” car driven by Cotton Grable had either been built by, or was owned by (and maybe both) James Milton "Gabby" Hall of Dallas, Texas and had been driven by Tex West in the races in Winfield in 1934.

Tex West, whose real name was Austin E. Wetzler, was born in 1903 at Marysville, Kansas, died in an airplane crash in Texas in 1962, and is buried in Highland Cemetery at Junction City, Kansas.

Joseph F. “Joe” Ziobro (1902-1969) promoted auto races from the early 1930s until his retirement from the sport after one of his race programs ended in a brawl at Waco, Texas on August 12, 1956.  Among the places Joe promoted auto races are Anthony, Wichita, Hutchinson in Kansas; Dallas, Ft. Worth, Haskell, San Antonio and Waco in Texas, and at Oklahoma City.

Pat Cunningham (1903-1972) was one of the charter inductees into the High Banks Hall of Fame at Belleville, Kansas.  He is believed to have driven a car owned by Texas Gene Fredericks at Winfield.

Lonnie Lee Rose (1906-1935) is one of only a few men to race both cars and motorcycles on the half-mile racetrack at Winfield, Kansas.  He passed away under mysterious circumstances less than a month after participating in this race at Winfield, and is buried in Riverview Cemetery, Arkansas City, Kansas.

Charles Loren Fondoble (1907-1996) was a dirt track specialist who did most of his racing in Kansas.  He started racing cars in 1929 and won his first race at Quinter, Kansas in 1931.  He also held the one lap track record at Wakeeney, Kansas for several years.  Fondoble was listed in Who’s Who in Auto Racing in 1936.  He had moved to Palco, Kansas by 1937 and was living in Wichita, Kansas in the early 1950s before he moved to Pea Ridge, Arkansas.

According to an article published in the August 8, 1935 issue of National Auto Racing News:  “C. E. Hamilton, of Topeka, Kansas crashed thru a fence and hit a tree.  A piece of board pierced his chest and he died at the Winfield hospital.  The race was won by Tex West…”  An article on page 7 of “Coast Auto Racing” states:  “The first driver to crash was C. E. Hamilton of Topeka, Kansas who hit the outside fence at the south turn, ripped out a rod of railing and landed against a large tree.  He received several fractured bones in his face and numerous injuries on his body and chest.  Hamilton later died at the Winfield Hospital.”

Don Radbruch (1924-2008) noted racing historian and author, has speculated that the total purse for this race at Winfield would have been in the neighborhood of $200 with approximately $75 of that being the feature winner's share.  Typically, a racing program like this one, run at a fairgrounds racetrack in the 1930s, would have paid prize money to the first three finishers in the feature with some of the money being paid as "appearance money" to the better known drivers, that being counted toward the $200 total.

The following day (July 28, 1935), the contestants in these races competed in another Joe-Ziobro-promoted racing program on the half-mile dirt oval at Anthony Downs in Anthony, Kansas.

George Rice Chitwood, Sr. later known as “Joie” Chitwood, is pictured here in the Lawhon Special that he drove in these races at Winfield, Kansas.  Click your mouse on the photo above to see another of Chitwood in this same car - Larry Sullivan photos 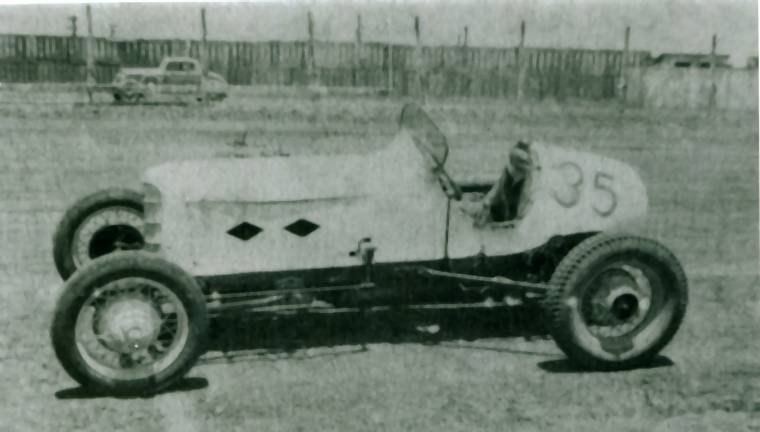 John Holland of Dallas, Texas (actually from Plano, Texas) received minor injuries when he crashed his #35 Cragar racing car through the fence at the north end of the Winfield racetrack.  This photo of Holland’s car was taken in Texas that same year.  If you know anything more about John Holland, please contact Bob Lawrence – Pappy Noe collection 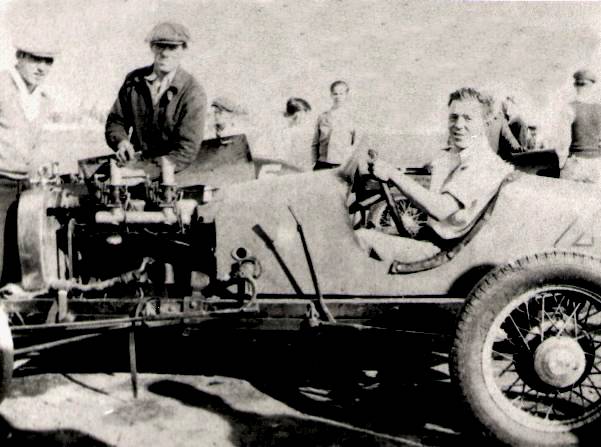 Red Hodges is pictured here in the #4 Ford Riley owned by Les Butler.  That is Butler standing at left and “Hotfoot” Walker in the dark jacket working on the engine – Pappy Noe collection 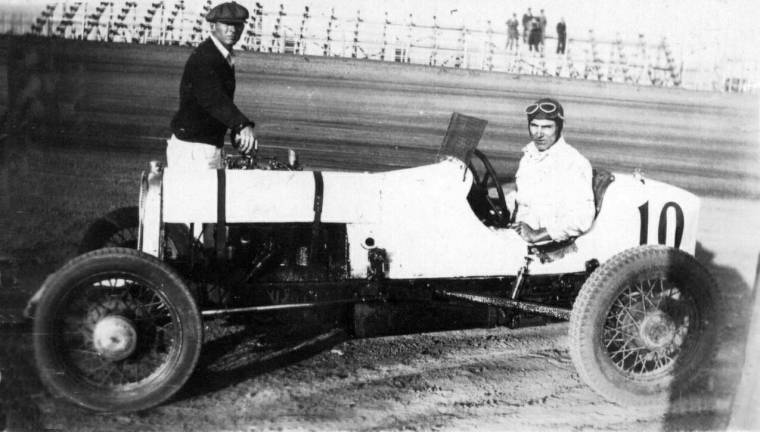 P. D. Plant of Dallas, Texas in the car he drove in these races at Winfield – Barbara Thompson collection 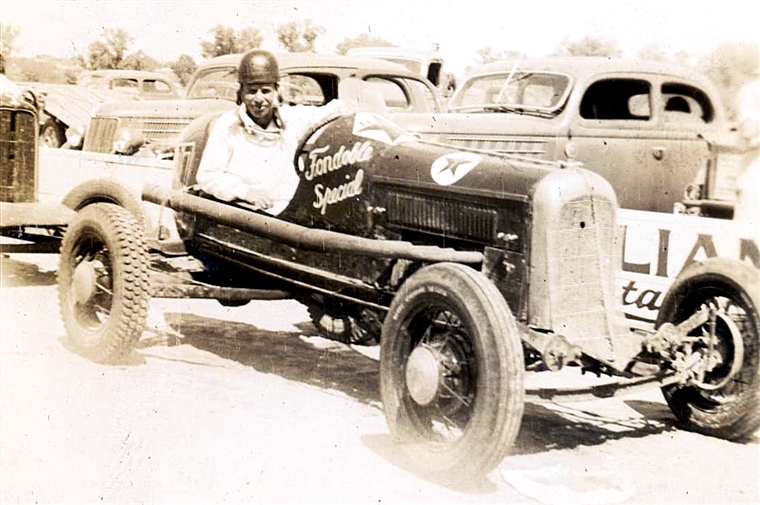 Some of the Drivers Who Competed at in these Races at Winfield:

Return to the History of Automobile Racing at Winfield, KS home page