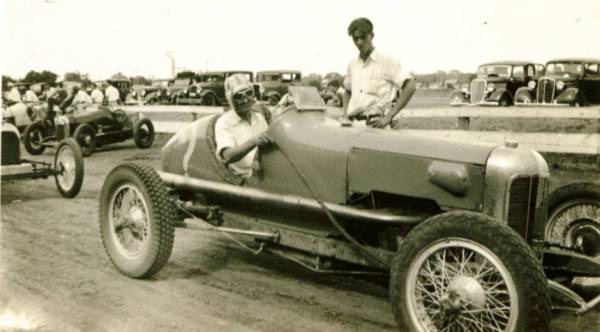 Tex West2 of Dallas, Texas is shown here on the front straightaway of the race track at the Cowley County Fairgrounds, Winfield, Kansas.  That is the Mayfield Special #C13 of Carl Mayfield of Wichita, Kansas backed up next to the fence at left in this photo.  As dangerous as it was, the cars actually pitted along that inside rail and stayed there throughout the racing program when not competing – Charles Pauley collection

As additional evidence that a speedy motor classic will be staged at the fairgrounds track Saturday afternoon, officials of the auto races announce the entry of Pat Cunningham, widely known St. Joseph (Missouri) racing driver.  Cunningham and his record smashing speedster are both widely known and he was one of the outstanding favorites at the Los Angeles meets in California last winter.

A Texan, “Cotton” Grable, of Houston, has entered the competition and will arrive in Winfield tomorrow.  He is the outstanding favorite at the Southwest racing world and, at Love Speedway in Dallas, he entered into a rivalry with “Tex” West,2 also listed for the local speed meet.  Just what the outcome of the long standing duel between these two will be hard to predict but “Cotton” and West have both shown their intention of finishing in the money.

Pitted against these three outstanding drivers will be C. O. Bennett, of Kansas City present holder of the state record for the half mile.  Bennett hopes to shatter his previous mark and hang up a new one for the boys to shoot at.

In order to avoid confusion and inaccuracy in timing, officials of the Winfield auto races are trying to secure the use of a special AAA electrical timing machine from Lincoln, Nebraska.  Although dirt tracks are not required to use this type of timing device, the fast entry list for the Saturday meet here caused promoters to use every available means of insuring that the races will be run off successfully and speedily.

Speed and Thrills will reign at the Winfield driver’s club track Saturday afternoon when more than a score of widely known speed stars will meet in open competition in the seven event auto race program.  Time trials start at 1:20 p.m.

Arkansas City auto race fans will have an opportunity to witness well known headliners of the dirt track in open contest.  The meet was planned to take place at the closing of the Southern and Western racing season and the result of this is the fact that the best of drivers will be driving.

Assured further action, the name of Pat Cunningham, St. Joseph, Missouri, holder of the Kansas state record and “Tex” West,2 driving the famous “Question Mark” and holder of the Winfield track record, have been added to the list of entries.  Other drivers include Cotton Grable, Verne Ellis7, Bill Morris1, and Carl Mayfield. 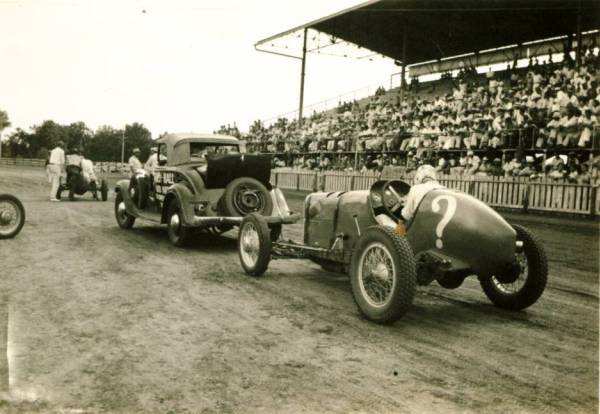 Tex West2 of Dallas, Texas prepares his “Question Mark” to be pull-started for a race on the Cowley County Fairgrounds half-mile racetrack at Winfield, Kansas.  This car was either built by, or was owned by (maybe both) James Milton "Gabby" Hall from Dallas, Texas – Charles Pauley collection

A large crowd of probably 3,000 were in the stands at the fairgrounds this afternoon to witness the auto races.  Up to 3:30 p.m., no races had been completed because of the time trials, smash-ups, and other incidents on the track.  Thrills aplenty were furnished the crowd however, and two cars were put out of commission during the running of the first race.

Number 14, driven by Charles Pauley 8, cracked up in the time trials and was placed out of the running.

The first race proved to be exciting from the standpoint of smashups.  Morris, driving Number 4, crashed into the fence but, after getting clear of the fence, he proceeded on the track.  However, before the cars had proceeded another half distance around the track, Number 5 Blue, driven by Cotton Grable; and Number 1, the fastest car in the time trials, driven by Oscar Coleman, crashed together on the turn and were disabled for further use in the races. 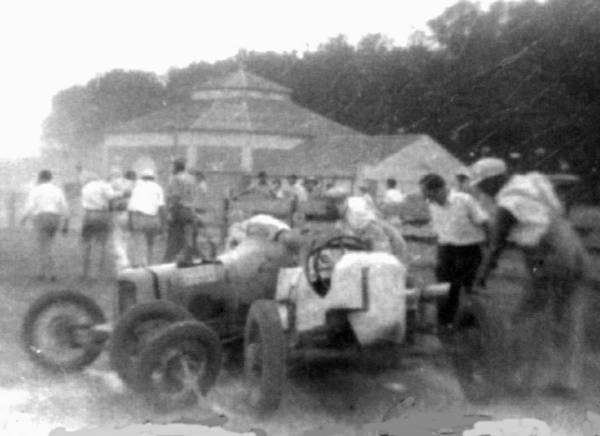 The cars of Texas drivers Cotton Grable, left and Oscar Coleman are shown here at the head of the front straightaway at Winfield after they had crashed together in the fourth (northwest) turn during the first heat race of the afternoon.  Notice that one of the drivers is looking over the wreckage while the other receives assistance walking away in the background at left – Swart family collection

Auto races, featuring the speediest cars seen in Winfield in many years, thrilled a large crowd Saturday afternoon at the Winfield fairgrounds as a close to this city’s week of racing.

1 Bill Morris was an alias often used by Ben Musick of Dallas, Texas when he drove race cars.

2 Tex West, whose real name was Austin E. Wetzler, was born in 1903 at Marysville, Kansas and died in an airplane crash in Texas in 1962.

3 This was the very first automobile race that George Rice Chitwood, Sr.  (1912-1988) ever competed in.  He had been working as a mechanic on the car owned by Shorty Meinholtz when driver Fred Zimer came into the pit from a practice session complaining that the car was not handling well.  Chitwood replaced Zimer in the car and thus began his illustrious driving career.  Remembering that Chitwood was from St. Joseph, MO, a racing publicist once called him “Joie” and the nickname stuck.  Joie Chitwood he went on to race in the Indianapolis "500" seven times as well as tour the country with his own automobile "Thrill Show".

4 Charles Waldo Barnett (1905-1947) was killed in a racing accident at Ord, Nebraska and is buried at Terrel, Oklahoma.

8 Charles Leroy Pauley drove a blue #14 Chevrolet 4-cyllinder with an Oldsmobile head.  The car was owned by Charles’ uncle, Henry Pauley (1897-1962) of Herington, Kansas.  Charles won the second heat and placed third in another race on this day.  He collected a total of $20 for his efforts.

9 Charles Daniel “Jack” Kannapel (1908-2002) is buried in Mt. Calvary Cemetery in Huntington County, Indiana where he had resided since the late 1940s.