Thrills, spills, and speed brought forth gasps as the large afternoon crowd watched seven stock car races Thursday afternoon at the fairgrounds.  Twenty cars jockeyed for position during the opening long stretch.  This phase of racing (time trials) was to be culminated for the last afternoon's event.

Statistics show that at least nine cars went off the track in starting rounds; one car (Bud Webster) turned over on its top in the second semi-final.  No driver or fan was injured and at least six cars dropped out mid-races.

For "relief", the big crowd gave 4-year-old Billy Collins a big hand as that future speedster raced his miniature vehicle up and down the track before the grandstand. 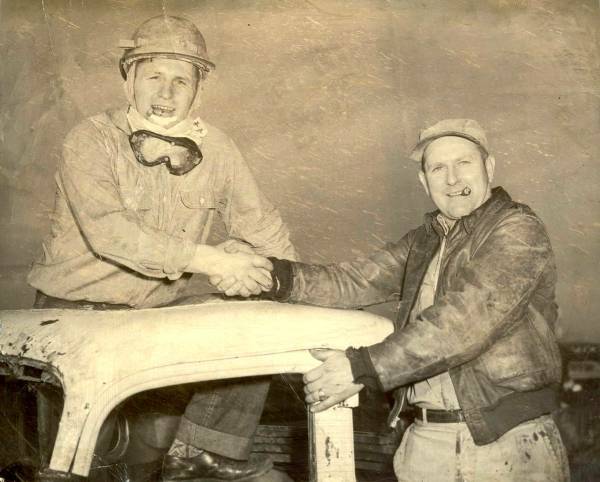 Left to right: Joe Collins, car owner; Bob Eichor, driver; and Willard Bodkins, car builder and mechanic.  Bob Eichor, of Oklahoma City, drove this V-8 Ford coupe at area racetracks during part of 1951 including to a fifth place finish in the feature in this race at Winfield.  Bob felt the throttle linkage did not have enough travel and drove it without his right shoe in an attempt to better feel the throttle – Willard Bodkins collection

SOME OF THE DRIVERS WHO PARTICIPATED THAT DAY

Return to page one of the History of Automobile Racing at Winfield, Kansas