In his Frontenac – Mike Cline collection

The first mention of the Clines located to date is in an article on the front page of the July 26, 1929 issue of the Winfield Daily Courier stating that Joe Kline, known as the “Dixie Favorite”, was bringing his fast Laurel from Mascot, Tennessee to race at Winfield, Kansas the next day.  No further record has been found of Joe Kline but Major Cline from Mascot, Tennessee did drive a Laurel special in that race.  He was 11th quickest (of 15 cars) in time trials.  He finished last in the first heat race but came back to finish 4th in the “Straw Hat Derby” and 6th in the feature race.

On Labor Day, September 2, 1929, Phil Cline gave his hometown as Lincoln, Nebraska when he entered a Laurel special in an A.A.A. sanctioned race at the Arkansas City Speedway west of Arkansas City, Kansas.  Also entered in that race was a F. G. “Major” Kline who was also listed as being from Lincoln, Nebraska.  Major Kline entered a Ford special.  While their names appear on the entry list, there is no mention of them in the race results of that day.  It is currently unknown if they had poor luck or if the even appeared.

Both Cline brothers won heat races at the Ozark State Fair at Carthage, Missouri on August 8, 1930 and Phil finished second to “Dad” Harrier in the sweepstakes event that day.

The Clines entered the races at the Illinois State Fair at DuQuoin, Illinois run on September 1-6, 1930 but it is unknown how they did there.

On Tuesday, November 11, 1930, the brothers entered a race at the Knoxville Motor Speedway in Morristown, Tennessee but the results from that event have yet to be located.

One clipping from the Knoxville Journal has been found stating that Phil Cline lapped the entire field and won the feature race at the Knoxville Motor Speedway on Memorial Day but the clipping is not dated so the year of that race is unknown.  Major Cline also finished second in that event behind his brother.  Major Cline had won a heat race earlier in the day with brother Phil finishing second to him in that race.  Major Cline also won the Australian Pursuit race.

The Cline brothers raced at Lexington, Nebraska in August of 1931 but, again, it is unknown how successful they were.

The Clines also competed in a race at Ord, Nebraska over the three-day Labor Day holiday weekend in 1931.  Click your mouse HERE to see a couple of photographs taken at Ord during that weekend.  Again, neither Phil nor Major’s names appear in published race results from that event.

In an article from the October 1, 1931 Winfield Daily Courier states that the Kline brothers from Knoxville, Tennessee will be among the entrants in the auto races to be run at the Cowley County Fair in Winfield, Kansas on October 7, 1931.

Two days later, the following paragraph appeared as part of a story in the Winfield Daily Courier:

“Among the drivers who have thus far made entries for the speed event are: Floyd O’Neal, Ashville, N.C., driving a Glorier Special.  O’Neal is known as the Southern Cyclone and is rated as stiff competition.  Phil and Major Cline, the famous brothers from Knoxville, Tennessee, will be in Winfield also.  Phil drives a Laurel Special and Major a Frontenac.”

This October 7, 1931 race is a mystery as, although well-advertised, no results have ever been located.  The newspaper the following day devoted much space to a speech given to the grandstand full of people before the race but fails to mention anything about the races that day at all.

The following is from a letter from Phil Cline’s daughter, Virginia Eudy:

“After his racing career (Phil) owned an operated a welding and machine shop in Jefferson City, Tennessee and farmed part time.  He enjoyed racing on radio, TV, and in person the rest of his life.  My nephew has his goggles and (the) steering wheel from his racecar along with other memorabilia.

“(Major Cline) was a steelworker and lived in Florida for quite a number of years before moving back to Jefferson City.  He was more the daredevil and probably did not finish as many races due to wrecks.

“Phil and Major won 31 races in a row.  I do not have dates on that, but possibly that is why they were known as the ‘Famous Cline brothers’.  Reportedly, between the two of them, they won over 100 races.  One of the reasons they were sometimes listed as being from different towns, I believe, came from the fact that they would live in a town, work and earn enough money to keep their cars ready, and then race.  They did this in a number of towns throughout the west.” 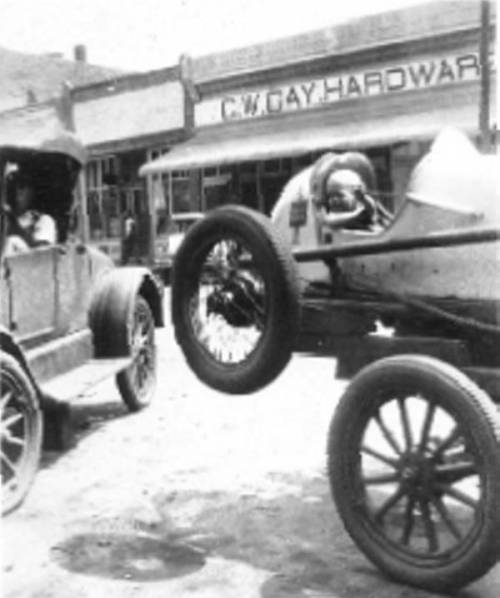 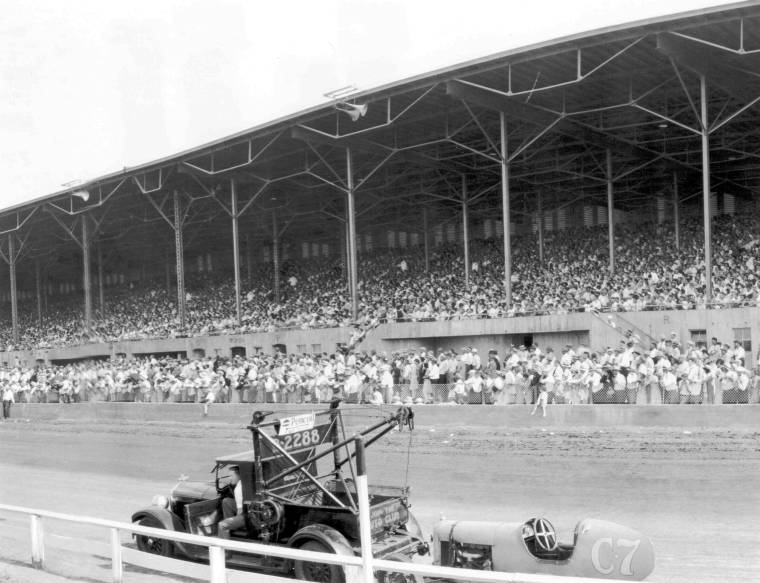 Phil Cline’s #C7 car hooked to an early wrecker at a race at the Nebraska State Fair in Lincoln, Nebraska in 1932 – Bob Mays Collection

If you know anything more about the racing Cline brothers, please contact Bob Lawrence at: sprintguy @ cox.net