Back of the Pile
Lyle Baker is the man in the cap at left.  Jim McAmis can be seen sitting on top of car #P51 at far right having just climbed from the #2 car farther into the pile.  Do you know anything about car #91, above?  If you do, please contact Bob Lawrence - Gary Virden photo

The 1937 Ford coupe #V8, at right was owned and driven by Clyde Ferguson of rural Winfield, Kansas.
Car #P-51 at left was owned by Raymond Rhodes of Alva, Oklahoma and driven by Cleman Humphries of Watonga, Oklahoma.  Edd Sneary of Alva, Oklahoma can be seen through the side widow of the #P-51 car, bending down to inspect the damage to his #0 Ford.  The man smoking the cigarette, standing in back of the man in the straw hat, is Jim McAmis who was driving the #2 car sandwiched in the middle of this picture.  Behind Jim McAmis, to his right and back a little, is J. D. Cox.  The second man to J. D.'s right (in the dark shirt) is George Carroll.  The short man standing to J. D.'s left is Buddy Quick.  The man in the straw hat in front of Buddy Quick is Bob "One Punch" Miller.  J. D. Cox, Buddy Quick, and "One Punch" can also be found in the photograph of car #91 near the top of this page.  Below is a slightly different angle of these same cars - Gary Virden photo

Above, you can see Edd Sneary's #0 Ford coupe back and just to the right of center in the picture.  Some men behind the Sneary car appear to be looking down at the ground.  The one in the light colored shirt at right with his arms folded is Lyle Sneary and they were looking at an injured Max Ritter who was sitting there on the ground - Gary Virden photo

By the time this photo was taken, wreckers had cleared cars #0 and #P51 away.  Jim McAmis, with a cigarette and with his hand, can be seen inside the 2-door Plymouth sedan in the rear of this photograph.  He was driving car #2 owned by Elmer Orton of Arkansas City, Kansas.  The man in the straw hat at right is Bob "One Punch" Miller - Gary Virden photo 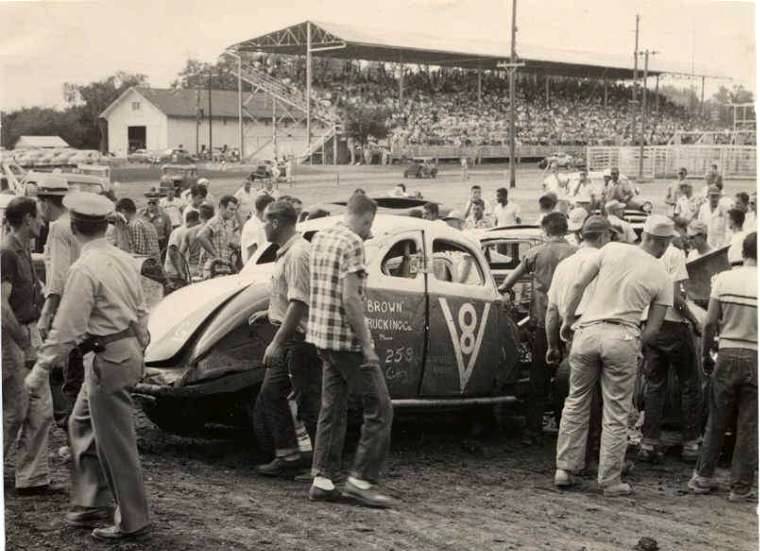 Clyde Ferguson's 1937 Ford coupe #V8 can been seen in each of the four photographs above.  Lawrence Brooks, of Arkansas City, Kansas, in the dark colored t-shirt, looks on from the far left side of this photo.  The man in the straw hat in front of Lawrence is Bob "One Punch" Miller.  The car at the left front corner of the #V8 car is Edd Sneary's #0 Ford coupe that was driven by Max Ritter - Gary Virden photo

Bud Webster is shown here climbing from his wrecked stock car near the outside of the first turn of the Winfield racetrack on Labor Day, 1954.  Bud suffered a broken arm in this accident - Gary Virden photo

*Carl Richard Oxenreider (1925-1992) was a salesman and resident at Wichita, Kansas for many years.  He moved to Greeley, Colorado before passing away at Englewood, Colorado.