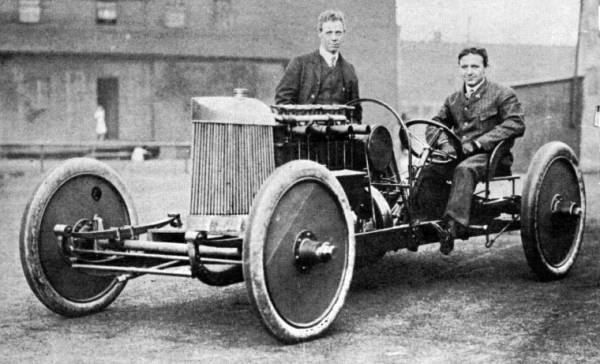 Barney Oldfield in the Peerless Green Dragon in 1905 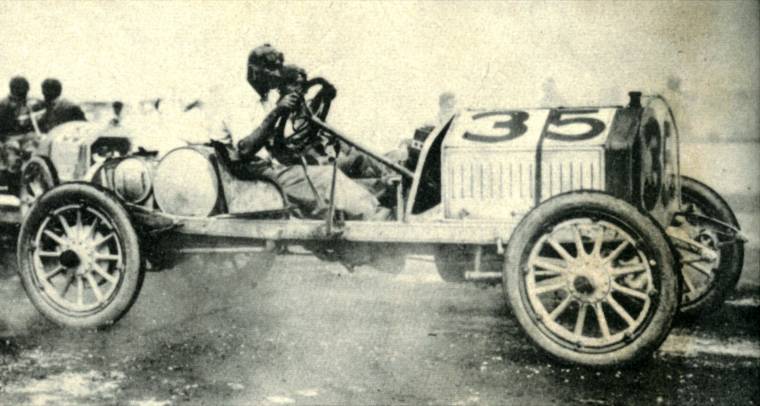 Bob Burman in a Buick

The Buick Factory Auto Racing Team at Flint, Michigan around 1908

Louis Chevrolet, Louis Strang, and Bob Burman were the headline drivers on the Buick factory racing team.  In a four year period from 1906 to 1910 the Buick racing team compiled the best record of any American automobile manufacturer including winning more than 500 racing trophies and victories at the Indianapolis Motor Speedway in its inaugural 1909 season.  Sales were directly affected by this record of success in competition.  By 1908, Buick was the American automotive industry leader in sales.  The only ones to be identified in this photo so far are Louis Strang (seated on the car in front of the rear tire); Walter L. Marr (fifth from right) who was Buick’s first engineer; W. W. Brown (fourth from left on the front row), Joseph R. Common (ninth from left with wide brin hat) and Glenn Breed (standing at far right) were all team mechanicans; Bob Burman (seated in car nearest the camera); and Louis Chevrolet (seated in the car beside Burman).

The car is the Model 16 Buick #10 that had been modified for racing.  The car had been constructed as one of the team’s few “Marquette-Buicks” in 1908 and began its record setting racing career in January of 1909.  It was retired from service in 1923 and became a part of the collection at the Indianapolis Motor Speedway Museum in 1964.  Click your mouse on the photo to see another of the same car and group of men that was taken at the same time and place.  The men in the photo above, are also identifiable in that photo.  If you can identify anyone else in these photos, please contact Bob Lawrence at: sprintguy @ cox.net