LA HISPANO SUIZA FABRICA DE AUTOMOVILES, S.A. is an Spanish company founded in 1904 in Barcelona by Damián Mateu and other Spanish capitalists.  The technical direction of it was given to the young Swiss engineer Marc Birkigt, already working in Spain since 1900.  Literally translated, Hispano-Suiza means Spanish-Swiss, in order to publicize the nationality of the technical director, even if he was just an employee; the capital of the company being entirely Spanish.

From 1904 to 1914 Birkigt designed for La Hispano Suiza a great number of different engines, cars and trucks, starting with the 20/24 h.p., a water cooled, side valves, 4-cylinder designed in 1904 and going through piston supercharged racing engines, the first 4 cylinders 16 valves, and the car considered to have been the very first real sports car in history, the Hispano Suiza 45 Cr, or “Alfonso XIII”, name given after the King of Spain, great enthusiast and customer of the brand.

In 1911 La Hispano Suiza opened a new factory in Paris, to give a better response to the big French market that was demanding more and more Hispano Suiza cars, particularly the sporty Alfonso XIII.  With the time the French factory (Spanish owned) would grow more and become bigger than the original of Barcelona.

In 1914, with the WW I declaration, frontiers were closed and the Spanish Aeronautica Militar was not able anymore to buy their engines from Germany as they had been doing for some time.  For that reason, an official request was placed to La Hispano Suiza of Barcelona, asking the company to design and produce an aero engine able to cover the necessities of the Aeronautica Militar.

Birkigt designed and developed the new and revolutionary Hispano Suiza V-8 engine in only a few months, using all the experience gathered with the design of the T- 30 overhead valves, direct command 4-cylinder car engine.  The excellence of the new design interested not only the (neutral) Spanish Army, but particularly the French one, eagerly needing powerful and reliable aero engines to fight the German Air Force. The V- 8 started with 150 h.p. and was successively developed to 180 h.p., 200 and 220 h.p. (geared versions), and later to a new and bigger 300 h.p. engine.

In 1923, at the requirements of the French Ministère de la Guerre, that was not happy to have a Spanish company as his first aero engine supplier, the Paris branch of La Hispano Suiza would become a French registered independent company, the “Société Française Hispano Suiza”, that, anyway, remained with a majority of shares (71%) in Spanish hands until WW II.

The Hisso became the first mass-produced engine to have a solid aluminum cylinder block into which steel sleeves were threaded to form the cylinder housing.  The sleeves had flanges on the bottom and were bolted to the crankcase.  The crankcase was a 2-piece unit which was split horizontally on the centerline of the crankshaft.  Each 4-cylinder head and valve system was of single piece aluminum casting.  The Hisso was produced under subcontract by some other 12 French companies, all licensed by the Spanish mother company and almost unable to cope with the huge demand of the engine in the war period.  Other licenses were given to Wolseley Motors in England; the National Arsenal in Czarist Russia; Itala, SCAT and Nagliati in Italy; Mitsubishi Motors in Japan and the American Wright-Martin (later Wright Aeronautical) that built more of them than anyone else at their plants in the United States.  The total production of the V- 8 engine during the WW I was of 49,893 units, a world record that would stay for many years.

With a 4.724 inch bore and a 5.118 inch stroke, this 718.88 cubic inch (or 11,762 c.c.) engine produced 150 h.p. @ 1,450 r.p.m.  By the end of World War I, several thousand more Hisso engines had been produced than had airplanes to put them in, so many of the engines were declared to be war surplus and sold off new in their crates at prices ranging upward from $10 each.  The Hisso was soon adapted for auto racing by turning it around backward from its aircraft position and fitting a transmission and, or, clutch to the prop end of the engine.  The engine proved to be fast but its dry weight of 470 pounds weighed the front of the cars down so much they were difficult to drive.  By the late 1920’s, Hisso engines were being raced with just one bank of cylinders.  The stock 90° crankcase would be blocked off on one side, either left or right, with a full plate, or four individual plates, to eliminate one whole cylinder assembly making a 359.44 cubic inch, single overhead cam, 4-cylinder power plant.  That large displacement generally limited the engine’s usage to outlaw racetracks as few sanctioning bodies would allow Hissos to compete.  Trying to come up with something stronger than the stock airplane crankcase, someone came up with the idea to cast their own crankcase that would allow not only the cylinder to run upright but the oil pan, or sump area, to run perpendicular to the upright cylinder.  There were many different ideas as to how that should be accomplished.  The magneto and water pump side drives were custom made and allowed for a more reliable, lighter units than the big stock units.  Only the crankshaft and one bank of cylinders, either left or right, were used from the stock engine.  In part to increase compression, the rods, pistons, cams and valve train (or cup systems) were all custom made along with the crankcases, in most instances.  Many of the Hisso racing engines were built with custom crankcases including 99% of the successful ones.  In that configuration and with the increased compression, the 359.44 cubic inch, 4-cylinder engines could turn as much as 2,750 r.p.m., whereas the cylinders had a tendency to blow loose from the stock crankcases when pushed that hard.

author of the book:

Hispano Suiza in the Aeronautics

These four photographs are of the Della Torre Thunderbird Hisso racing engine that was driven by Len Duncan in the late 1930s.  The oil pan on this engine is actually the lower half of the crankcase.  Pull that lower half of the engine off and the crank will basically fall out – Roger DeMatthews photos

The Fromm, Jeter, Helm, and Brisko Hisso racing engines were probably all based on of this crankcase - Jeff Adams collection 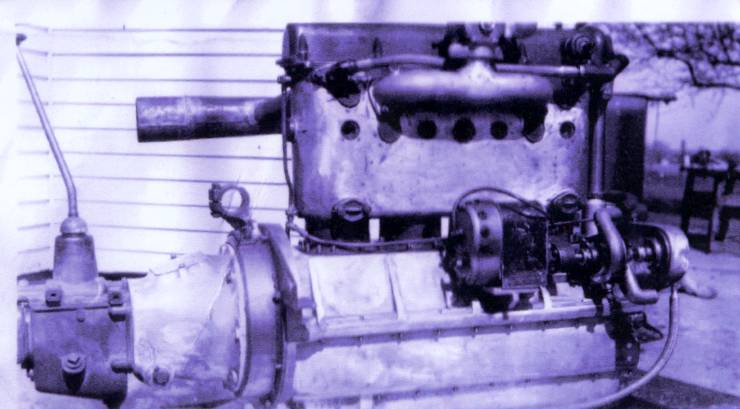 3.59.44 cu. in. 4-cylinder Hisso racing engine from #1 Davis Hisso of the 1930’s.  Click your mouse on the photo to see one of the other side of this engine – Jeff Adams collection 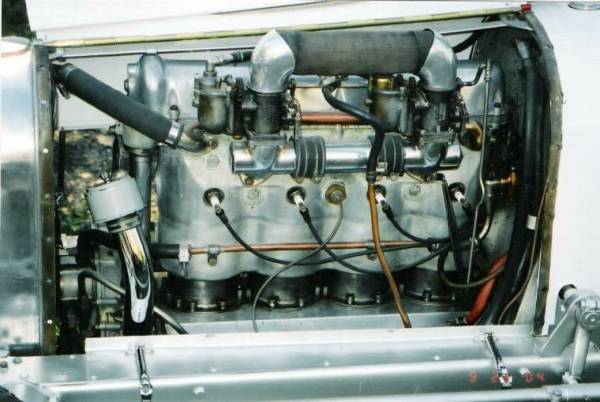 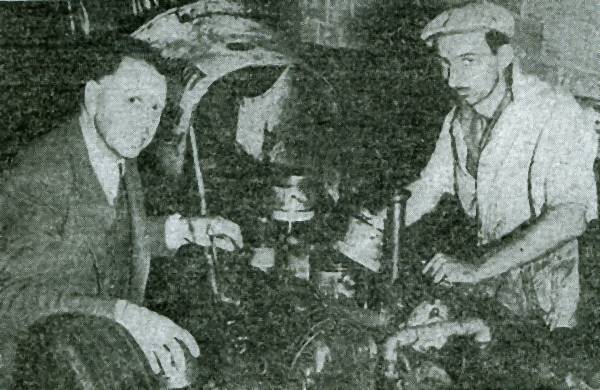