Big Car Races on the 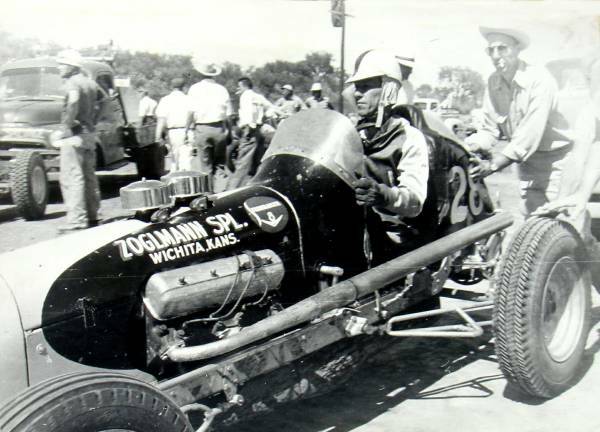 Car owner / builder Duke Westerhaus pushes his Studebaker powered stretched midget driven by Bob McKim into position to be pushed off for his time trial on this day.  When time trials were done, McKim had the fastest time of the day - Darrin McKim collection

Tiederman had purchased this car from Mark Bowles, Jr. and this was his first time to drive it.  He was struck by a dirt clod in this race breaking his noise.

Lies tried to squeeze between another competitor and the outside fencing but clipped the fence and rolled the Chet Wilson owned Ford.

The cars of Routh and Wadsworth tangled eliminating both from the race.

This photo was taken this day.  The lined up outside of row two at left is the #5 Chet Wilson Ford V8-60 known as “Mighty Mouse”.  The cartoon character was later painted on the cowl of this car that was being driven here by Frank Lies.  The car pitted next to the stage and just to the right of the front row of cars on the racetrack was owned by Peaches Campbell of Tulsa, Oklahoma – Larry Merrick collection

*  Gerald “Curly” Wadsworth was fatally injured in a racing accident in Kansas City, Kansas in 1956.