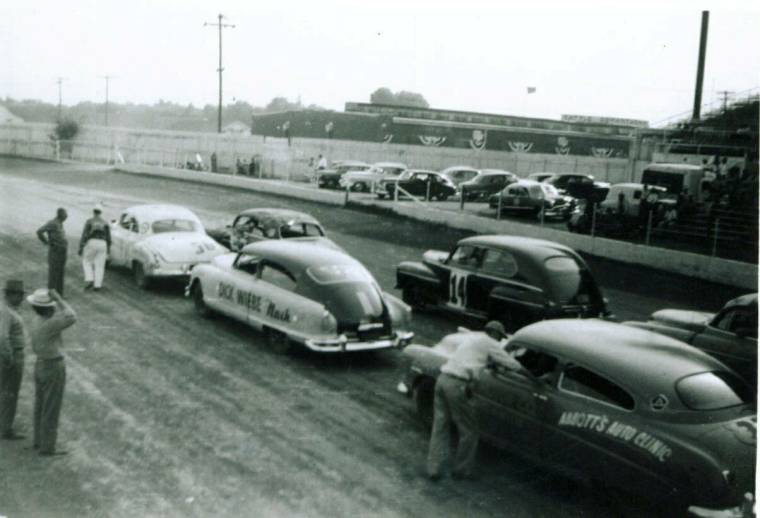 Lined up for this Race at Hutchinson

The Oldsmobile 88 #56 on the pole was driven by Jim Roper while the Plymouth #14 on the outside of the second row was driven by J. R. “Bob” Cox.  If you know who was driving any of the other cars in this photo, please contact Bob Lawrence.  Click your mouse on the photo above to see some other photos taken at about the same time as this one – Bob Cox collection

Massey was driving the “Johnny Sutton Hudson”.  He took the early lead but dropped out when the Hudson threw a wheel.  The car was repaired and he returned to the race only to loose another wheel which ended his drive for the day.

Dugan assumed the lead when Massey dropped out.

Black lost a wheel on the 150th lap and dropped out while running in second place.

In the most spectacular crash of the day, South knocked down 100 feet on the west side of the track when he lost control of his car.

Dugan lead to lap 180 when he made a pit stop leaving the lead to Roper.  Roper went into the pits on lap 190 handing the lead back to Dugan.  Dugan led to lap 215 when he made his final pit stop giving the lead back to Roper.  Dugan was in second place and only a half lap behind Roper with eight laps to go when Dugan’s Oldsmobile vapor locked and he dropped out.  Only four cars were running at the finish with Cox in second place just a few laps behind Roper.

Roper was able to win this race in spite of taking a "no time" in time trials when his car broke an axle and lost a rear wheel.