Time trials for these races were run on Saturday afternoon, July 25, 1959

This race was televised locally for the first time.

Lies led the first 12 laps before loosing the lead to Will Forrest on the 13th lap.  Lies passed Will Forrest on the 34th lap to regain the top spot.  Lies and Forrest raced side-by-side down the front straight-away on the 40th lap before Forrest regained the lead in the south turn for good.  He led Lies at the finish by four car lengths.  Leep trailed the two by a quarter of a lap.

The red 1932 Ford coupe driven by Will Forrest was owned by Ernie McCoy of Arkansas City, Kansas while the black car driven by Frank Lies was owned by Kenny Riffel of Herington, K ansas.

#99 driven by Bob Salem of Dodge City, Kansas and #16 driven by Nut Cokeley of Liberal, Kansas are shown here in the pits off of the back stretch and outside the white wooden fence that circled the outside of the racetrack.  That is Cokeley in white standing near the back of his car – Cokeley collection

Wayne Harbold drove the car above.  It arrived at the racetrack on Saturday numbered 98 and was owned by Wes Bartlett.  Harbold crashed Bartlett’s car (numberred 84 with flypaper numbers after time trials) through the fence in the south turn in a race on Sunday afternoon.  Click your mouse on the photo above to see another view of this crash – Bartlett collection

Officials trying to warn oncoming cars that the car of John Marshall of Wichita, Kansas had spun out and caught fire after tangling with anther car in the semi final race – Dave Hamilton photo from the Hutchinson News

This photo was taken on this day and was taken during driver introductions.  The car on the outside (nearest the camera) of the front row was driven by Todd White of Hutchinson, Kansas while the #79 car directly behind White’s car was driven by Willie Hecke of Franklin, Nebraska.  Click your mouse on this photo to see another taken just seconds earlier as the cars were coming out of the pits for these driver introductions – Todd White collection

This photo was taken before the start of one of the races on this day.  The only car in this photo to be identified so far is the car at right with the panther painted on the side.  It was driven by Keith Cofield of Wichita, Kansas – Photo from the 1969 Merrick Nationals program 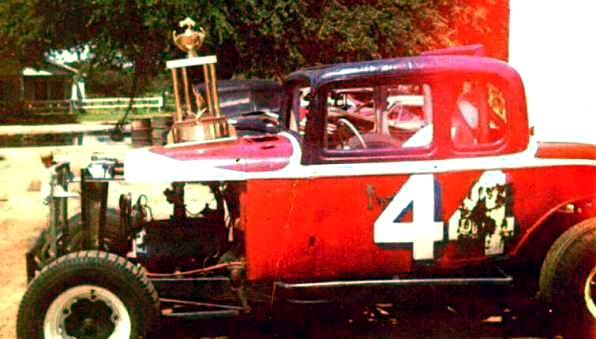 Will Forrest of Wichita, Kansas turned in the 7th fastest qualifying time in time trials for this race on Saturday afternoon and then came back to win the 50-lap National Jalopy Championship race on Sunday afternoon in this 1932 Ford coupe owned by Ernie McCoy of Arkansas City, Kansas.  The trophy sitting on the hood is the trophy that Forrest won for that accomplishment.  The photo above was taken the following day and after the temporary #7 made of sticky-paper had been removed from the side of the car.  Click your mouse on the photo to see how the car actually appeared in the racetrack on Sunday – Mike McCoy collection

1 The car numbers listed are the numbers that were assigned to the cars after time trials on the day before.