Time Trials for the

(These cars were known regionally as “rails”)

The definition of a “jalopy” changed in Jack Merrick promoted events before this race to allow “just about any body styling”.  Beginning in 1960, a jalopy consisted of a “frame, wheels, and roll bar surrounded by whatever metal enclosure the owner chooses to use”.  Engines, however, had to remain “stock” and “originally assembled before 1949”.

Some new railroad ties were installed this year to help keep cars from crashing into the wooden fence surrounding the racetrack.  The repair bill had been averaging $500 to $700 after each day of racing.

Cars lined up to get gasoline just outside the back pit gate.  After officials filled each car with gasoline, they placed a seal on the tank.  If a post-race inspection revealed that the seal had been tampered with, the car was disqualified.  The two men walking toward the camera at left are drivers Stanley Trahern and Gene Coffman - Dorothy Cokeley photo

According to a handwritten notation by Nut Cokeley on his copy of the time trial list above, Jack Walker was replaced in his car by Harold Leep.

Although Spain turned in the 4th quickest time, it wasn’t set until after he had rolled his car over on its roof during a warm up period.

Watkins suffered a broken jaw when he spun into the fence during a warm up period.

Sisson rolled his car during warm-up laps but was able to repair it in time to participate in time trials.

#16 Gene Potts of Great Bend, Kansas in line to have his car inspected before checking into the pits for time trials on this morning at the Kansas State Fairgrounds – Cokeley collection 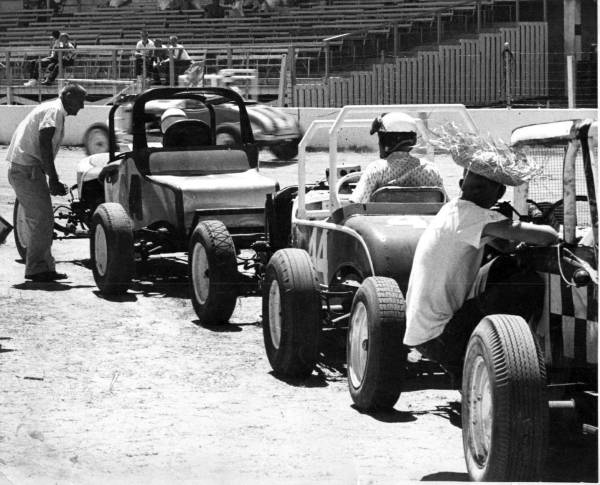 Lined up for Time Trials on Saturday

The sticky paper numbers were not applied until the next morning so the car on the racetrack is the #14 of Ralph Cole.  That is Bob Thackery standing at left visiting with Forrest Coleman in the Ernie McCoy owned #4A.  The #44 is Will Forrest in the second Ernie McCoy owned car.  The car at right was the #32 of K. O. Christian – Mike McCoy collection

Mack McIntosh of Sedgwick, Kansas is shown here receiving the white flag from starter Ted Davis during time trials.  His time of 34.70 seconds was only the 88th quickest time of the day - Hutchinson News photo

1 The official program did not list a 13th position in time trials skipping from 12th to 14th position instead.

5 Listed car numbers were assigned for this day only and were applied to the cars on sticky paper after time trials.