(This was the last race ever sanctioned by U.M.C.A.) 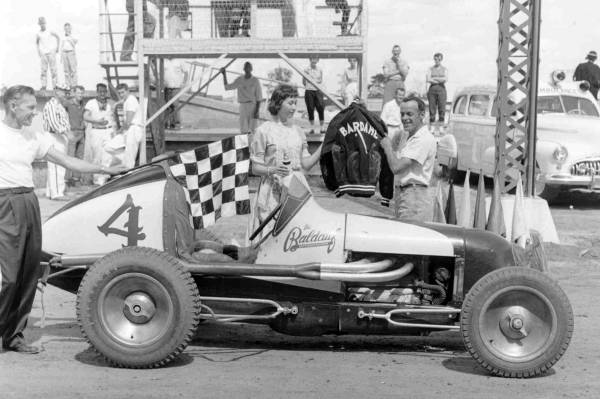 McCormick won by a margin of 80 yards.

Curley’s GMC drifted high in the north turn on the second lap and crashed into the fence. 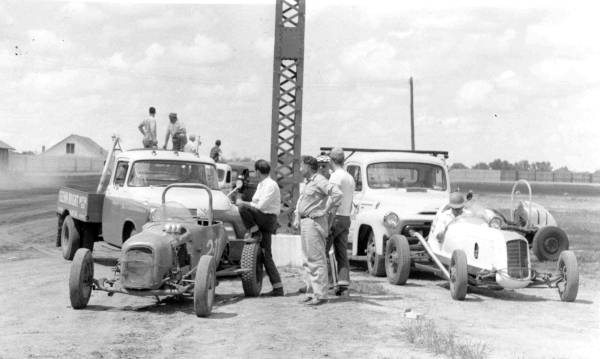 The #2-11 hot rod at left is a Chevrolet six-cylinder owned by Jack Skinner and driven by Frank Brennfoerder of Exeter, Nebraska.  The white car preparing to be pushed off at right is an unidentified #89 sprint car.  The #17 at right is Jim Curley’s GMC powered sprint car – L. A. Ward photo 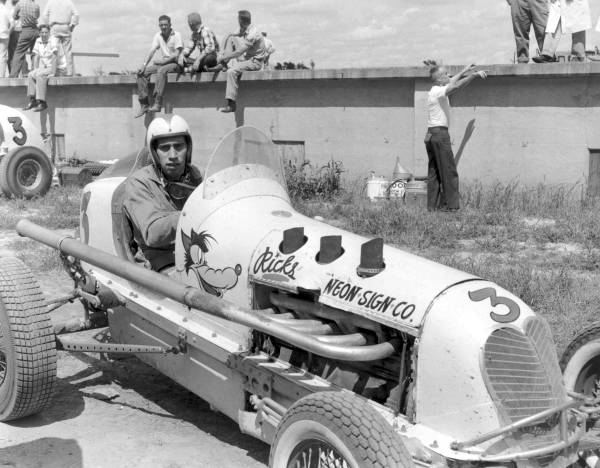 Frank Garcia of Liberal, Kansas is shown here in his six-cylinder Hudson powered sprint car.  The sprint car in the background at left is the #3 driven by Gaylord Higer of Superior, Nebraska – L. A. Ward photo 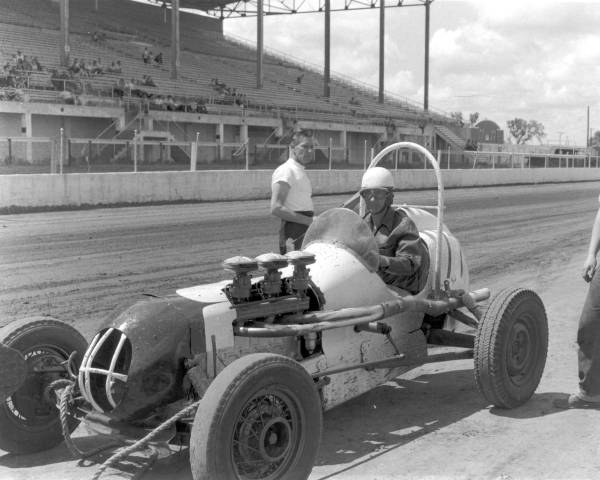 This #17 sprint car was owned and driven by Jim Curley of Hutchinson, Kansas.  It was powered by a GMC engine.  The man in the white shirt in the background is flagman Bob McKim – L. A. Ward photo 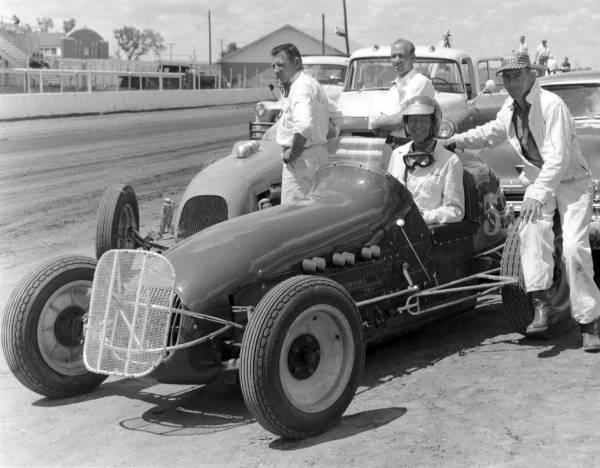 Pappy Noe of Gallup, New Mexico in his #52 sprint car.  The sprint car in the background has not been identified – L. A. Ward photo 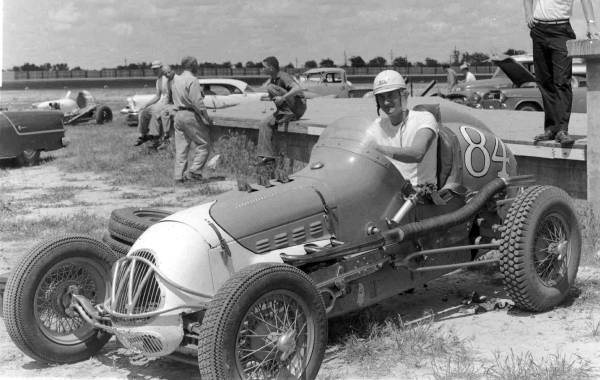 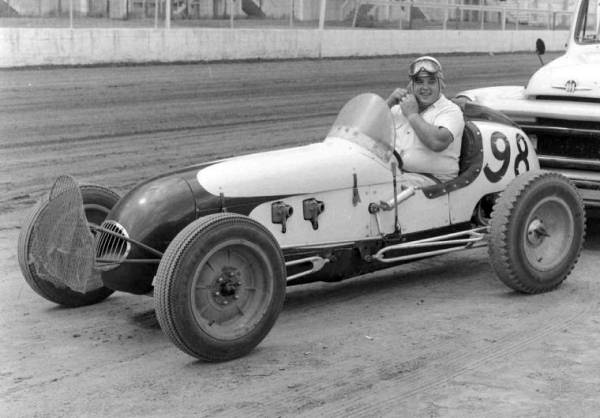 Buddy Quick of Wichita, Kansas in the Gibson Offy #98 – L. A. Ward photo 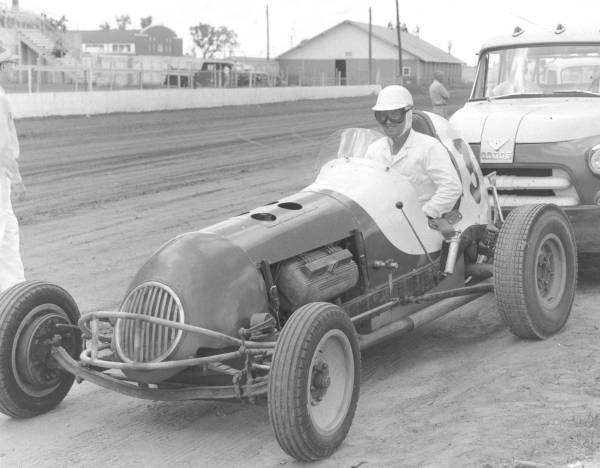 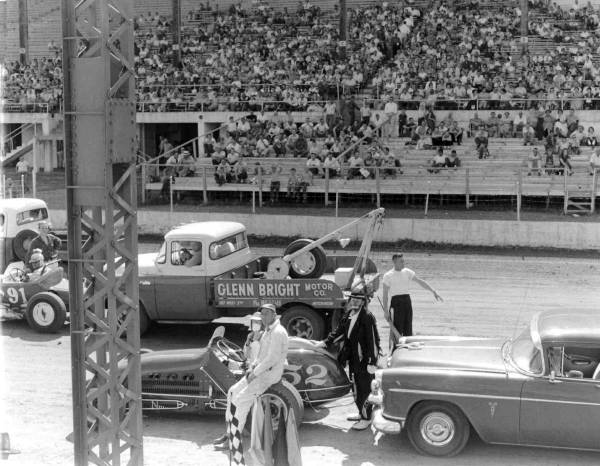 Shown lining up for one of the races are Buddy Taylor at far left in the Taylor Oldsmobile powered hot rod #91.  The #52 sprint car was driven by Pappy Noe of Gallup, New Mexico.  The man standing at the rear of Noe’s car is Max Madison as “Peanuts the Clown” – L. A. Ward photo 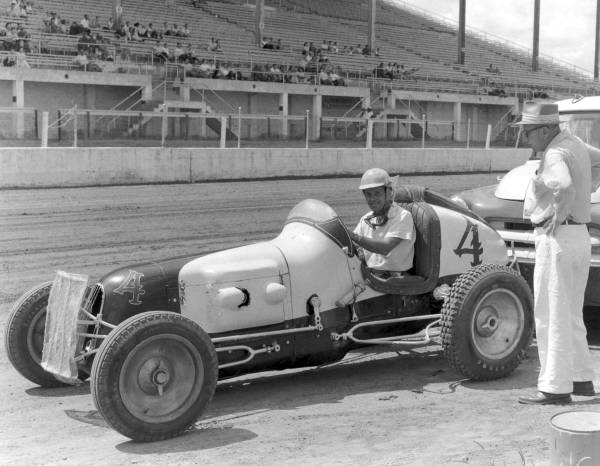 This photo was taken just off of the front straightaway near the south end of the infield stage.  This hot rod competed on this day but it is unknown neither who drove it nor what the whole number was.  Click your mouse on the photo to see another photograph showing this car on the front straightaway.  If you can identify this car or its driver, please contact Bob Lawrence – Lehman collection

Henry Green of Amarillo, Texas drove this Wayne Chevrolet sprint car #7 owned by L. B. Taylor also of Amarillo, on this afternoon.  Click your mouse on this photo to see a photo of Green in this car on the front straightaway – Lehman collection

The crowd of 1,500 looks on as two unidentified cars race down the front straightaway on this afternoon – Lehman collection