Time trials for these races were run on Saturday afternoon, July 30, 1960

(These cars were known regionally as “rails”)

The definition of a “jalopy” changed in Jack Merrick promoted events before this race to allow “just about any body styling”.  Beginning in 1960, a jalopy consisted of a “frame, wheels, and roll bar surrounded by whatever metal enclosure the owner chooses to use”.  Engines, however, had to remain “stock” and “originally assembled before 1949”. 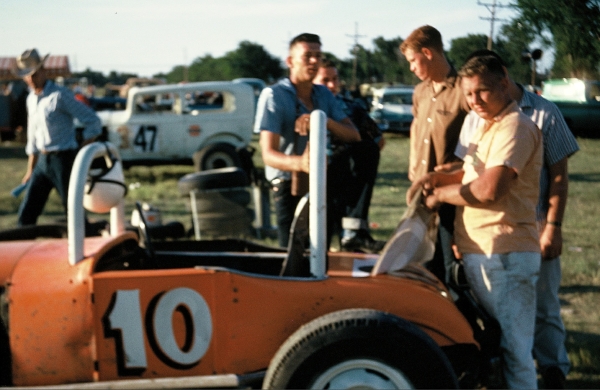 Beckel crashed into the fence on the very first turn of the race causing the event to be restarted.  He was able to resume the race but did not finish.

Jacobs’ car struck a stalled car, sailed high into the air and over the outside fence before tumbling down an embankment to ground level.  He received severe lacerations and was unconscious when the ambulance took him to the hospital.

Hilton and Roy Bryant both spun out and their cars came to rest against the fence.

Woodside held the lead until his engine gave out.

Spain then led for 7 laps before he had to pit to repair a broken weld.  He finished in 4th place, two laps behind Coleman.

Collins assumed the front spot from Spain and led for eight laps before he spun out, his car coming to rest against the fence near those of Hilton and Roy Bryant.

Lies was the next to lead the race.  He built up a quarter of a lap lead in the 22 laps he was in front before his engine threw a rod and he coasted into the pits.

Will Forrest crashed into the fence on the back stretch.  He was able to drive away but dropped out of the race after another half-lap.

Hiner dropped out with a blown radiator.

A coil spring in the seat of Lutkie’s car caught on the drive shaft causing the sprint to thrash around wildly inside the car tearing up the seat in the car as well as the seat out of Lutkie’s pants.  After hasty repairs, Lutkie returned to the race only to spin out later in the event.

Thus, with only 11 laps remaining, Coleman found himself in front having inherited the lead from Lies and it was all he could do to hold off Curless.  Only 11 cars were running at the finish including Leopp who had moved up from his 40th starting spot to finish in third place.

Cokeley collected $80 in prize money plus $3 in contingency money for his 6th place finish in this race.

#9 Leland Salmans is shown here after he spun out in the 4th heat race.  #22 Clarence “Nut” Cokeley in a car owned by Merle Trahern and #7 Frank Lies driving a car owned by Cliff Durr are passing by on the outside – Roger Burnett collection.

#85 Leroy Powell bounced into the air before overturning in the south turn during the 30-lap Semi-final race.  Powell's car had struck the disabled #82 car (hidden in the dust) that had been driven by Paul Grumbein - Hutchinson News photo

John McGee of Dodge City, Kansas is shown here at Hutchinson.  He finished 7th in the feature race on this afternoon – Roger Burnett collection

Three of the Heat Race Winners

Winner of the Trophy Dash

Bill Nelson of Wichita, Kansas is clearly visible in the white #2 car starting on the outside of the front row

Photo above from the 1961 National Jalopy Championship program

Cars lined up on the front straightaway preparing for the start of the feature race but this photo was taken a little farther back in the lineup for that race.  #4 Leon Spain, #5 Charlie Lutkie, #6 K. O. Christian, and #7 Frank Lies.  Starter Ted Davis can be seen in the background at left holding the green flag up to let the drivers know that he is ready for them to pull away to start their pace lap – Lies collection

These cars are also lined up on the front straightaway preparing for the start of the feature race only this photo was taken even farther back in the lineup for that race.  Right to left are: #14 Forrest Coleman, #15 Bill Curless, #17 Francis Kingan, #18 Bud Bryant, #19 Ralph Cole, #20 Gene Potts, #21 Charlie Hiner, and #22 Nut Cokeley – Dorothy Cokeley photo

Forrest Coleman, pictured here on the front straightaway at Hutchinson the day after this race, had driven this car to victory in the feature race.  Click your mouse on the photo above to see another from the Mike McCoy collection showing car owner Ernie McCoy standing beside his engine shop in Arkansas City, Kansas with the car and the championship trophy won that day.  Note that Forrest Coleman’s car is numbered 4A in these photos yet was car number 14 in the races themselves as in the photo below – Photo from the 1961 National Jalopy Championship program 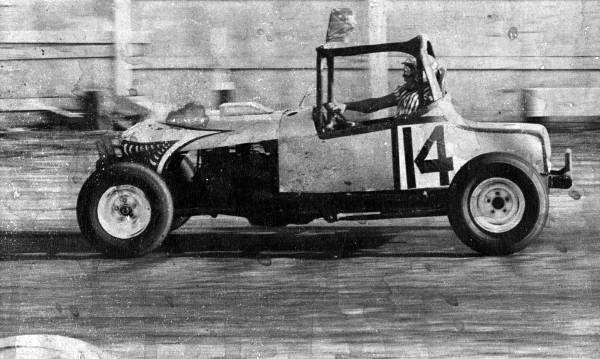 Forrest Coleman had qualified 13th quickest in time trials but, since Merrick did not use the number 13, this car was designated as car number 14 for the day and that number was applied over the cars original number with large sheets of sticky paper.  The paper did not stick very well and most of the paper numbers on all of the cars had come off by the end of the day.  Click your mouse on the photo above to see another photo showing Coleman, car owner Ernie McCoy with the car and the trophy they won that day – Mike McCoy collection 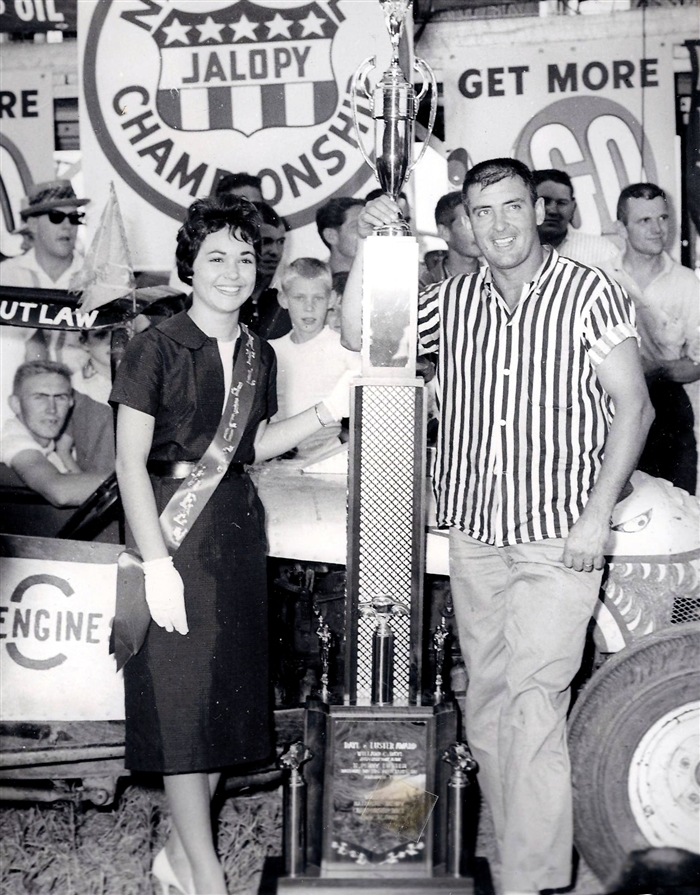 1 The official program did not list a 13th position in time trials skipping from 12th to 14th position instead.

5 Listed car numbers were assigned for this day only and were applied to the cars on sticky paper after time trials.