Big Car Races on the

This photo of Ralph Foster of Salina, Kansas was taken while he was seated in his Hisso on its trailer on June 30, 1940 but the placard was advertising these races in Hutchinson to be run on this July 4th - L. A. Ward photo form the Randy Pedersen collection

This photo of Clarence Merritt in the Peaches Campbell owned DO Hal car was taken after his feature race victory on this date at Hutchinson.  That is Peaches Campbell standing at right – Darrin McKim collection

Wesley Irvan McCracken’s car burst into flames in front of the south end of the grandstand and McCracken huddled behind the cowl until the car slowed enough that he could jump to safety.  He was not injured but his car was severely damaged.

According to various newspaper accounts, C. T. “Jim” Sherrill arrived at the track late and his car failed the safety inspection.  The feature race was the only event remaining on the program but officials ordered Sherrill's car removed from the premises.  Sherrill talked to the gateman on his way out and convinced him to hold the gate open for him at the beginning this final event.  When the cars began their pace lap, Sherrill started up his car in the parking lot, drove through the open gate, and joined the field at the back.  He was trailing the field by quite some distance on the second lap when he lost control of his car in the northwest turn and crashed through the fence and then into the brick wall of the paddock.  Sherrill was seriously injured and his car was destroyed in the accident.

L. A. Ward's account in National Auto Racing News said that Sherrill's car lost the nut that held the steering wheel in place leaving Sherrill no control and causing the car to crash.  Crash helmets were not required at that time and Sherrill was not wearing one helping to account for the serious head injuries he suffered.

In his book, One Tough Circuit, Bill Hill tells the rest of the story.  It seems that Sherrill’s car actually came to rest on top of a brick men’s restroom burning the occupant when the radiator burst.  The incident thus earned Sherrill the nickname “Radiator” Sherrill. 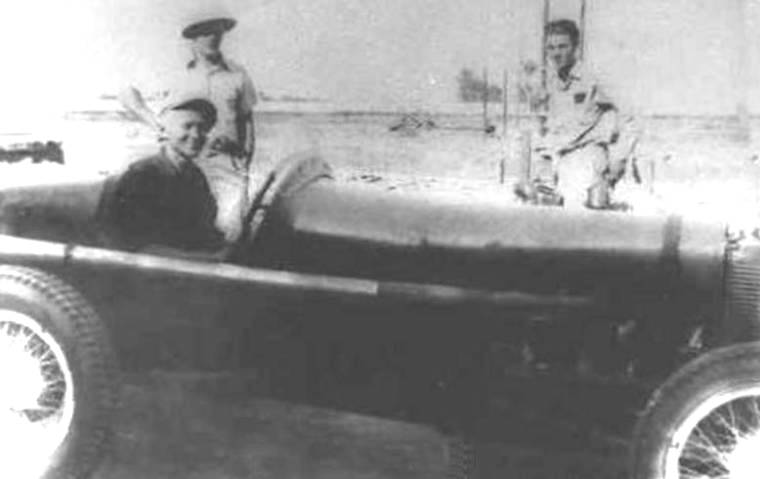 Murray Earl of Hutchinson, Kansas is shown in a car that he owned in this photo that was taken at Hutchinson on this day.  The car was driven by Waldo Barnett - Roy Eaton collection