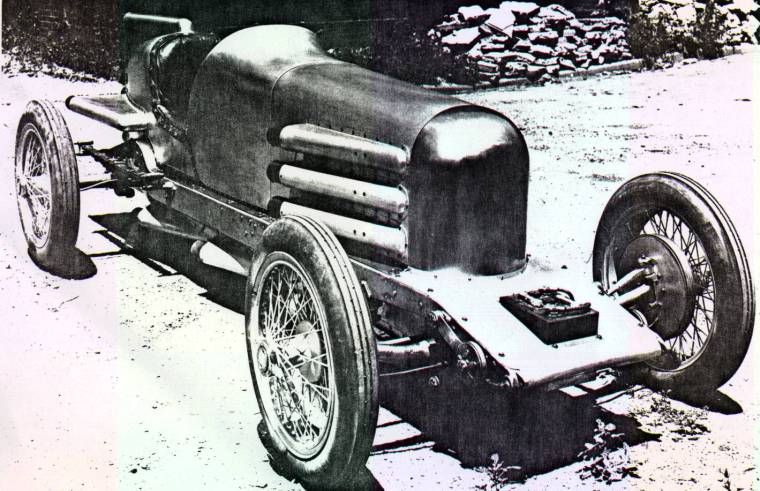 Sig Haugdahl built the first man-driven rocket powered car in the early 1930s.  An earlier effort, built in Germany a few years earlier, was an unmanned rocket sled that ran on a rail.  Sig only drove the rocket car in exhibition runs, the first public one being on June 17, 1932 at the Bo Sterns Speedway, 10343 N. Broadway (then Lawrence Highway), Wichita, Kansas.  The car was scheduled to make a second exhibition run at the same racetrack on June 19, 1932 but that performance was postponed to August 7, 1932 due to rain.  When the car finally did make a speed run at Bo Stearns Speedway, it turned one lap on the half-mile track in 33.2 before the rockets burned out on the second lap - Photographs from the Sigurd W. Haugdahl collection 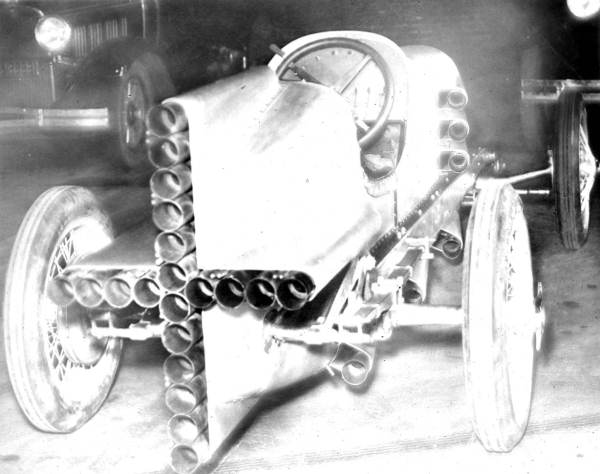 Racing Machine Shows Here for First Time on Any Track

A private showing of the newest auto racing speed contraption, the rocket car built by Sig Haugdahl, famous dirt track champion, was made here Friday at the Bo Stearns farm where Sunday races are to be held.

The car was built during the winter season by Mr. Haugdahl and his assistants at a cost of several thousand dollars.  Had the car been built entirely of new material, it would have cost between $8,000 and $9,000.  It is the first machine of its kind ever built claims its owner and it has never been raced and only once before (near Chicago) has it been put on a track.

The car is propelled by explosive rockets which are built by an Italian at Joliet, Ill.  There are 32 tubes.  The rockets used here yesterday were one pounders costing slightly less than a dollar each.  Thus, the one speed trial which consisted of a mile, burned up $25 worth of explosives.  However, Mr. Haugdahl says that larger rockets which will be used on the straight-aways and which will give the car phenomenal speed will be much cheaper.

The rockets are set off by a switch on what would be the instrument panel of most cars.  As the rocket car has no motor, starter, radiator, transmission, differential, and scores of other things necessary on the average pleasure or commercial car, the machine is comparatively simple.  The driver brings his switch around touching off two–four-ten rockets in that order and by the time the ten are blazing out, the car is shooting around 45 m.p.h. at a maximum although it looked much greater as he slid around the curves in a cloud of dust.

The famous German rocket car was merely a small railroad car on which tubes were built.  It was run on a railroad track and reached a rate of speed well over 100 m.p.h.  Mr. Haugdahl says his machine is the only one ever built to win on a curved track. 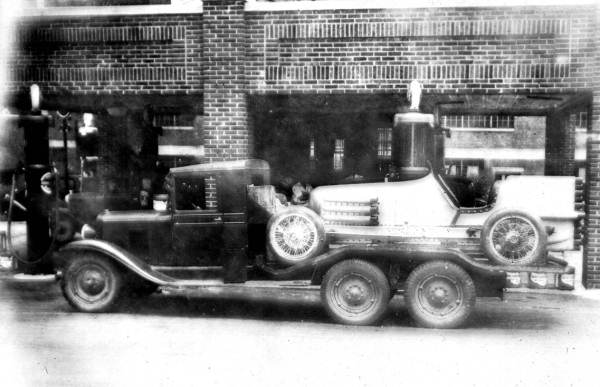