Advertised as 100 miles over a 1.7 mile temporary course utilizing runways and taxiways

This race was run counter clockwise around the 1.7 mile temporary course marked in black above with the start / finish line at about the midpoint on the east (right) straight-away - U.S. Geological Survey photo

***Buddy Quick competed in a jalopy race run at Winfield, Kansas on this date instead of racing in this event.

Time trials for this race were run over a measured quarter-mile with contestants allowed enough of a running start that the speeds recorded would have been flat-out top end speeds.  Bob Murra set the fastest time driving Frank Amos’ #3 Mercury powered hot rod.  One published account states that Jack Merrick set the third fastest time.

The advertised “Hot Rods vs. Big Cars” really did not happen.  All but one big car boycotted the race, the owners feeling the posted purse was insufficient.  The one big car that did compete (Junior Pickrel) was actually a hot rod that had just recently been converted to a big car.

This 100.2-mile race was run non-stop in one hour and 20 minutes with the winner averaging 75.34 MPH.  Charlie Lutkie led the first 24 laps before dropping out of the race with a blown head gasket.  Frankie Lies inherited the lead and built up a five-lap lead before his pit crew could get him slowed down to save the engine.  Even a lengthy pit stop at the mid-point of the race did not take him out of the lead.

Bob Murra had the fastest car all day but made too many pit stops for gas to catch the leader.

All except the cars of Shorty Jones and Harold Dean made at least one pit stop during the race.  Jones cut it close as he ran out of gas as he crossed the finish line.  Harold Dean spun his car out on the last turn of the race trying to get out of Shorty Jones’ way but, although Jones was running right behind winner Frank Lies, he was not on the lead lap.  Dean was able to restart his car and finish the race.

“On the first turn of the race, several of the cars ran in low but got into it too fast and slid out across the track and off into the dirt.  I anticipated that might happen and ran high to that first turn and then turned late across the track down low and came out with the lead.  I was never out of the lead again after that and my car ran beautifully all day.

“I don’t know what kind of tires were on the car.  I didn’t pay much attention to tires in those days.

“Troy Routh had an open pack of cigarettes in his shirt pocket.  You know, with just the corner of the pack torn off so you could pop them out.  After the race, those cigarettes only had about half the tobacco left in them.  The wind going over the top of the car would raise the helmet up trying to pull it right off your head and it had also sucked the tobacco right out of Troy's cigarettes." 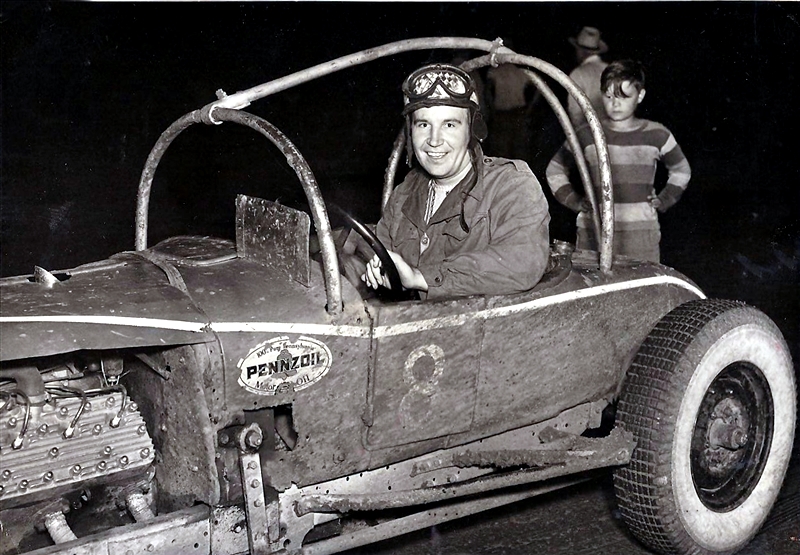 Frankie Lies of Wichita, Kansas in the Marvin Church owned #8 Mercury powered hot rod that he drove to victory on this day - Lies collection

Leroy Eugene “Junior” Pickrel of Tribune, Kansas is shown here in the #22 Wayne Chevrolet powered big car he drove in this race for the Ricketts brothers of Winona, Kansas.  This was the only “big car” to compete in this race billed as “Hot Rods vs. Big Cars”.  This photo was probably taken at this race as it was the only airport race it competed in – Cloyd Ricketts collection

Charles J. “Charlie” Lutkie in the #5 Mercury powered hot rod he led the first 24 laps of this race in before dropping out with a blown head gasket – Jim Edwards photo 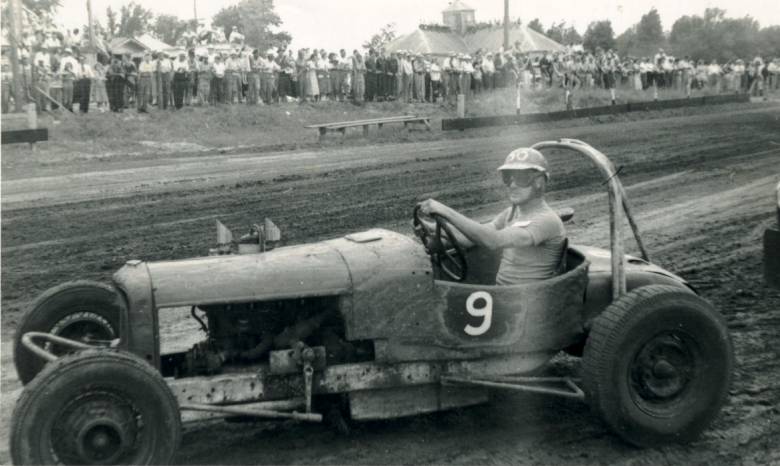 J. R. “Bob” Cox is shown here at a MRA sanctioned “Hot Rods vs. Big Cars” race at Concordia, Kansas on September 2, 1951 in the same hot rod he drove to a 10th place finish in this race at Great Bend.  (He won the feature in the above race at Concordia.)  The engine is a 4-cylinder Model-B Ford with a Miller Schofield head and two carburetors.  Note the magneto sticking through the hood between the carburetors.  Also note that the chin strap on Cox’s helmet is not fastened.  It was broken and would not fasten so he drove with it that way for most of the 1951 racing season – J. R. Cox collection 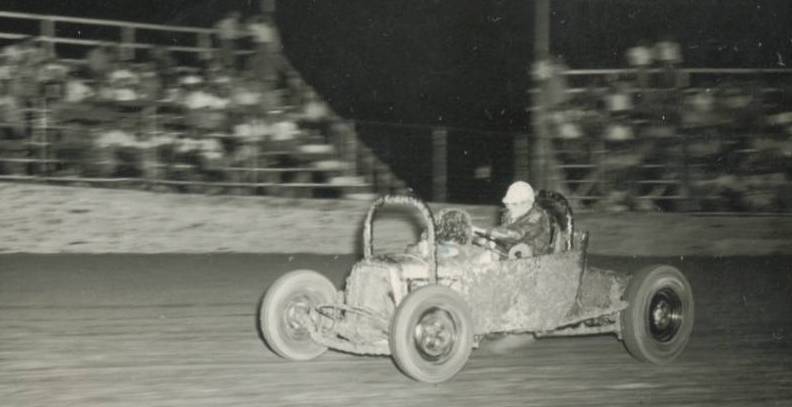 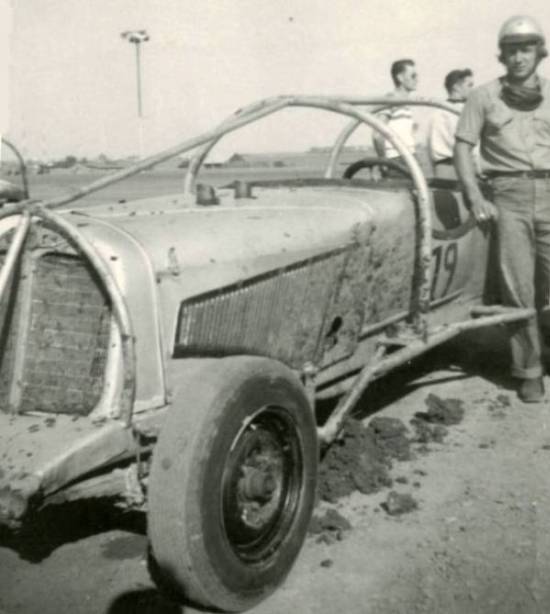 This photo of the Paul Hainke owned hot rod was taken at this race at Great Bend.  The driver in white is Troy Routh and the man standing in front of the right front wheel is race winner Frankie Lies.  Routh finished in 4th place – Tommy Madison collection

Click your mouse on the photo above to see another photo from the Don Radbruch collection showing Troy Routh seated in this Paul Hainke owned hot rod.

This is believed to be a street rod that had been custom built by Frank Kurtis for Indy car owner Jack Hinkle.  According to newspaper accounts of this race, Ralph Ritchter of Wichita, Kansas was the driver for this event.  It had also been the pace car for a stock car race at the Great Bend airport in 1949.  Click your mouse on this photo to see three more views of this car taken at this Great Bend race – Tommy Madison collection

“If the boys will cooperate”