The engine was a Model-T Ford equipped with a “R” Fronty head.  Judging by the suspension, the car probably handled quite poorly.  This car was destroyed when then driver Bill Epps rolled it several times during a race at Hugo, Colorado on September 12, 1930.  Epps was seriously injured in that crash – Fick Fossil and History Museum collection

Pete Bertrand was born at Pinos, Zacatecas, Mexico where his father was superintendent of a large Silver mine.  He grew up on the family farm in Franklin County, Nebraska.  By the late 1920s, he was competing on racetracks in Western Kansas and Eastern Colorado in his P.E.B. Special, the car apparently named for brothers Pete and Ernie Bertrand.

Another of Pete’s hobbies was piloting glider airplanes.

On one occasion, Pete and Ernie were farming a piece of land miles from a town and even farther from a doctor. They were staying there in some sort of shack.  Ernie came in from washing up to find Pete sitting in a chair at the table with a small rattlesnake on the table and a small oil lamp for light.  Pete held his finger in front of the snake until it struck but then would dodge the strike.  This went on until the snake wore out and would not strike anymore.  Pete’s little game upset Ernie due to the distance to a doctor and the nonsense of it all.

Pete did not like farming and, by the mid-1930s, had left his family’s sizeable farming operation then headquartered in Western Kansas and moved to Southern California where he competed as a driver at racetracks in San Diego and at Legion Ascot Speedway in Los Angeles from 1933 to 1935.  He finished eighth in the A.A.A. Pacific Coast Championship in 1934.  Among the car owners he drove for during that time were the legendary Morales brothers.

Pete was seriously injured in a racing crash early in 1935 and met his future wife, Esther (a nurse) while recuperating from those injuries.  With the pending birth of their first daughter, Esther insisted he give up driving race cars but Pete continued to be a prominent figure in both auto racing and boat racing circles by grinding racing cams.

One of the racing boats that Pete worked on was the record setting Yankee Doodle piloted by one of his employees, Clayton Sherman “Clay” Smith (1887-1954).

Pete was working on a “rocket plane” at the time of his death from pneumonia at the age of 40.  He is buried in Calvary Cemetery at Long Beach, California.

After Pete’s death, Clay Smith took on a partner and purchased the cam grinding business from Bertrand’s estate.  The business survives in Southern California today under the name Clay Smith Cams.

The photograph below appeared in the sports section of the Los Angeles Times late in 1934 with the following captions:

Pierre Bertrand And His Car

“Pierre Bertrand, Long Beach resident, in his car No. 74 before the start of the first race on the Ascot five-eighths oval Sunday, November 25.  Pierre is one of the few owner-drivers at the speed bowl and was among the boys who came into the AAA fold early this summer.”  That is Clay Smith standing at right – Carroll photo

The photograph below appeared on the front page of the sports section of the Los Angeles Times on December 17, 1934 with the following captions:

Throwing Mud in the Face of the Grim Reaper at Ascot 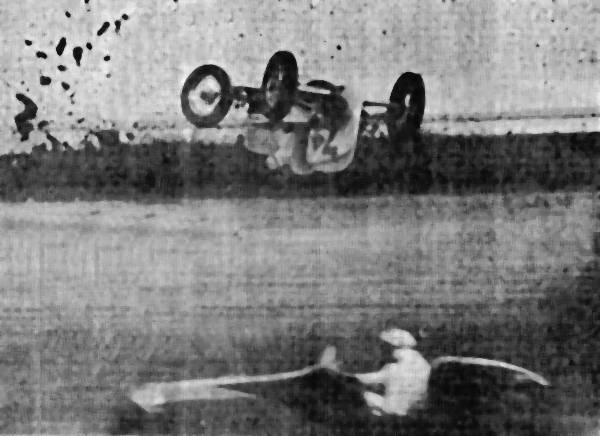 “Here’s Pierre Bertrand’s idea of how not to spend a pleasant Sunday afternoon.  The daring Frenchman skidded into the mushy ground on the ____ turn yesterday during the main event at Legion Ascot Speedway with the above results.  His car turned completely over, coming to a stop with Pierre still nonchalantly perched in the cockpit.  He was dragged out of the ‘saddle’ and rushed to the hospital but found to be suffering only from minor bruises.  The unconcerned driver of No. 36 is George Connors.  It was a close shave but the fans got their thrill – Carroll photo”

Return to the History of Automobile Racing at Oakley, Kansas