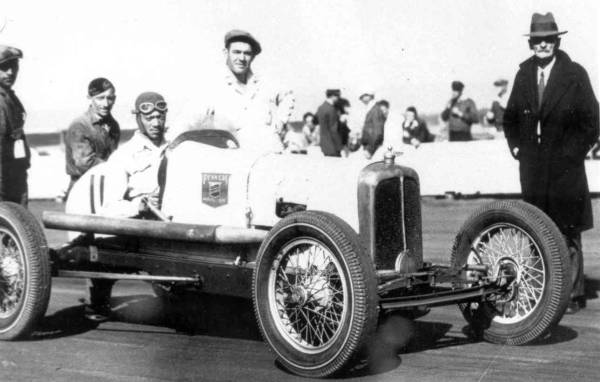 The following account was sent to me by noted auto racing historian, the late Don Radbruch, who told me that he knew Rajo Jack and had even competed against him on occasion:

The photo above of Rajo Jack in the William E. “Pop” Evans (a.k.a. C. D. “Pop” Evans)* ‘Flathead A’ was taken at Silvergate Speedway in San Diego, California in 1934.  That is Pop Evans at far right in the photo above.

Rajo Jack was born Dewey Gatson on July 28, 1905 in Tyler, Texas.  His father, Noah Gatson, and his mother, Frances Scott, lived most of their lives in the small town of Tyler.  Dewey was the oldest of six children.  Noah had steady work with the railroad and that alone may have kept the Gatson family in a slightly better state than the general poverty of blacks in Texas during that era.

Doc Marcell hired young Dewey Gatson as a roustabout for the Doc Marcell Medicine Show when he was just 16.  Dewey quickly proved himself as a talent with all things mechanical and especially anything with wheels and an engine.  Dewey modified a truck into a house car for the traveling Marcell family and kept the other cars, of which there were many, running well.  He was eventually in charge of the fleet of 20 vehicles that were part of the Medicine show "empire" of St. Johns, Oregon.  He became known as "Rajo Jack" because of the large number of "Rajo" high performance engine kits that were made for the Model-T Ford that he sold.  Dewey would soup up his own cars for better performance with a Rajo kit.

Rajo Jack raced and won in everything he drove - stock cars, midgets, big cars and even motorcycles.  He also did stunts on motorcycles and it was one of these stunts that resulted in an accident which blinded him in one eye.

Rajo Jack raced at a time when the colored barrier existed, but his talent and the respect he garnered among his peers allowed him access to racing circles in spite of his color.  Rajo Jack was one of the greatest black drivers of all time, but he is not only remembered as a black race driver, but as a talented race car driver.  He is still remembered by everyone who knew him as a genuinely nice man and was undoubtedly one of the first African American race drivers in America.

Rajo Jack sold auto parts and continued to race and work as a mechanic until his death on February 27, 1956.  On his death certificate, the name reads “Rajo Jack”.  He is buried in the Lincoln Memorial Cemetery in Carson, California. 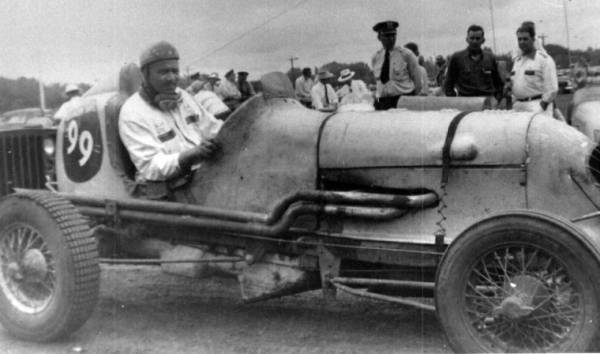 This photo of Rajo Jack was taken at Des Moines, Iowa in 1951 – Larry Sullivan photo

For a different view of Rajo Jack, the article following appeared on page three of the September 1, 1934 issue of Coast Auto Racing:

Rajo Jack returned to racing at San Diego (California) Sunday, August 12, after a hurried trip east, occasioned by the death of his aunt.  While east, he visited Detroit and Chicago and on July 28, took art in a race at St. Louis.  Rajo, driving a 4-port Riley, had third fastest qualifying time, won the second heat race and placed second in the main, thereby annexing a nice little piece of change for his efforts.

During the course of our conversation, several interesting items were dug out.  Rajo was born in San Francisco in 1905 and lost both of his parents in the earthquake and fire of 1906.  Rajo was taken to San Jose and lived with his aunt and grandmother until he was eleven years of age when he ran away from home and went to Alaska on a fishing boat and worked in a cannery for nine months.  He then stayed with the boat and finally put in his appearance after an absence of two years.

Rajo entered the race game in Vancouver in 1924 and in a special match race, won with room to spare.

Rajo, in the early ‘20s, got hooked-up with the concern making Rajo heads and out sold many dealers who had agencies.  The general manager of the company was so taken with Rajo’s sales ability that he conferred the name “Rajo Jack” on this young throttle pusher.  The name Jack DeSoto became obsolete and Rajo Jack has appeared on the programs of nearly every track in the United States.  Rajo has the distinction of having driving on more tracks than any man driving today.  Rajo has been driving at San Diego the past year, or so, and has been giving a good account for himself.

*  William E. “Pop” Evans (a.k.a. C. D. ”Pop” Evans) was born in Dallas, Texas and moved to Glendale, California early in the 20th century.  He was in the manufacturing business, making a high-performance head for the Model A Ford known as the Pop Evans high turbulence head, which had a re-entrance baffle that was angular rather than straight across like most others of the time.  Pop was a colorful character with a distinctive handlebar mustache.  Pop Evans also drove dirt track racing cars in Southern California the 1920s.  When he retired from driving, he became the head track maintenance man at Ascot Speedway at Lincoln Heights, California.  In 1941, Pop Evans was the chief track engineer for the American Racing Association (A.R.A.) and, with his crew, he built new speedways as well as travel throughout California preparing various tracks for upcoming races.  Pop passed away in Glendale, California in 1967 at the age of 91.