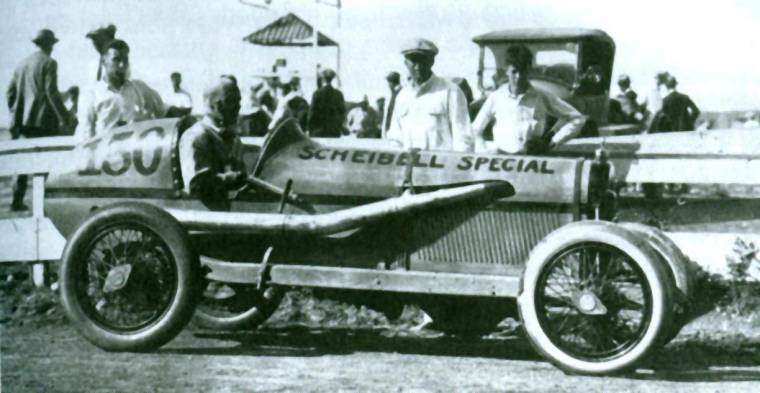 37 year-old Louis “Lou” Scheibell is pictured here in the #150 Hisso powered Scheibell Special at Frontier Park, Cedar Rapids, Iowa on September 6, 1926.  While competing in the feature race later that day, he swerved to miss another competitor, sturck a pole, and suffered fatal injuries.  Click your mouse on the photo to see another of Scheibell in this car that appeard in a 1926 Cedar Rapids, Iowa racing program. 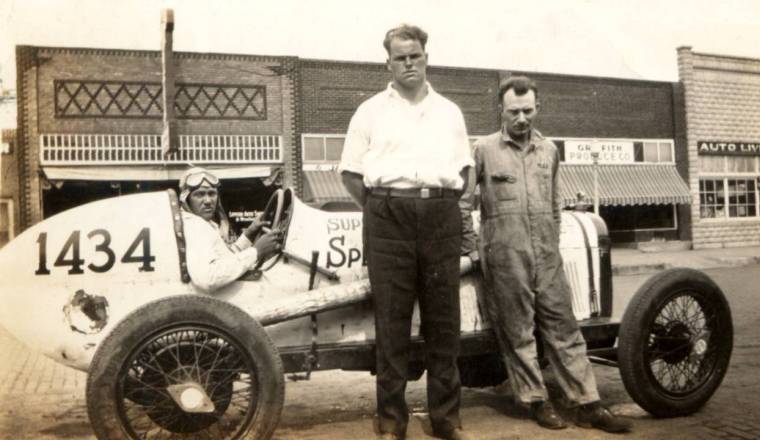 After Lou Scheibell’s death, his #150 Scheibell Hisso found it’s way to Winfield, Kansas where it became the #1434 Superior Special, the car number being the telephone number for the Superior Garage.  The car number was later changed to #43.

The above photograph of the car was taken in front of the Superior Garage at 606 N. Main Street, Winfield, Kansas.  Note the damage to the tail section that was sustained in a four-car crash during the feature race on the half-mile Cowley County Fairgounds racetrack at Winfield, Kansas on October 9, 1928 with Wendell A. Sparling driving.

Pictured in the photo left to right above are:  Alfred Lloyd “Ducky” Scott in the car and Robert Mervin “Bob” Maze, both from Topeka, Kansas; and Tom Murie from Hays, Kansas.  Murie, who had just purchased the Superior Special from Wendell A. Sparling when this photograph was taken, had worked on Hispano-Suzia engines while in the service during World War I.  Murie is reported to have claimed that the Superior Special was heavy and did not handle well.  According to Murie’s son, Al Murie, Kelly Petillo drove the Superior Special a time or two for the elder Murie in the early 1930s and before Petillo won the Indianapolis “500” in 1935.

Tom Murie of Hays, Kansas is pictured here with the Hisso powered Superior Special on the Kansas State Fairgrounds racetrack at Hutchinson, Kansas around 1932.  The hood is open exposing the plates covering the unused cylinder holes in the stock Hispano-Suzia aircraft engine crankcase.

The car was later purchased by Rae Bray of Hutchinson, Kansas but it is not known what became of the car after that - Al Murie collection