Newspaper ad that appeared in the: 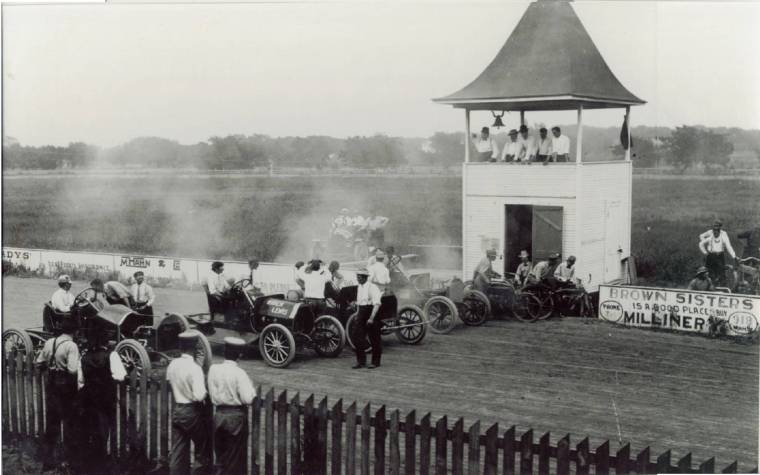 This photo was taken on this afternoon at Wichita, Kansas

Photo from the Bob Lawrence collection

The car second from left was a 4-cylinder Rider – Lewis that was driven by H. M. Willis.  It had been manufactured in Anderson, Indiana between 1908 and 1910.

The other two cars on the racetrack and the one in the infield have not been identified yet.  If you can identify them, please contact Bob Lawrence at sprintguy @ cox.net.

As for the motorcycles in the photograph, the following was written by John Koller:

Note the sign for the Brown Sisters Millinery on the railing of the racetrack at right in the photo.4

This program at the Wichita Fairgrounds was described as being “an afternoon of speed contests of real class”.  It included dog races, motorcycle races, and what the local newspaper reported as being the first automobile races in Wichita that were more than just an impromptu match between two vehicles.  The sun warped the rail on which the electric rabbit was to run and attempts to use live rabbits proved to be a colossal failure when the live rabbits turned out to be more afraid of the spectators than they were of the dogs.  The dog races were then canceled with a free program of those promised for a later date.  The motorcycle races were described as being “rather lame” but the automobile races, though very late in getting under way, were exciting and saved the day for the promoters.

All of the drivers entered were from Wichita.

5-mile (10-lap) race for automobiles with engines not exceeding 30 HP:

Light finished in second place and would have challenged Swain for the victory if he had not experienced ignition problems for a couple of laps.

This race had been scheduled for 7 miles (14 laps).  Light was not passed but dropped out of the race with a flat tire on the 13th lap.  Since only one car was left running, that gave the victory to Evans and ended the race.

This race was started with the two cars nose-to-tail and Evans in the lead.  Swain passed for the lead shortly before the engine in Evans’ Auburn died so Swain completed the distance alone.

In the third mile, Swain and Light were fighting for the inside position on the racetrack when Swain, who was slightly in the lead, lost control of his skidding Cole 30 Flyer and crashed into the fence on the outside edge of the racetrack.  The Cole 30 Flyer was considerably damaged but Swain had dropped down into the body of the car and escaped unhurt.

The day after Evans' victory in this race, the local Auburn automobile dealer touted the victory in a newspaper ad saying that you too could own a new Auburn for only $1,650.

1 William Krafve’s surname has been found spelled as “Kraver”, “Kravre”, “Krafave”,”Krafaie”, “Krafare”, “Krave”, “Krafre” and “Krane” in various sources.  We do know that William Krafve (by whatever spelling) was a car salesman for the Baldauf & Liggett automobile agency in Wichita.

2 Ed Snaverly’s surname has been found spelled as “Snaberty” and as “Snavely” in some sources.

3 Mahoney’s surname has been found spelled as “Mahaney” in one sources.

4 Charles A. Brown owned the Brown Sisters Company which was located on the second floor of the Schweiter Building on the northeast corner of Douglas and Main Streets in Wichita.

7Mr. Fratling’s surname has also been found spelled as “Fratzling”.

Return to the West Side Racetrack home page