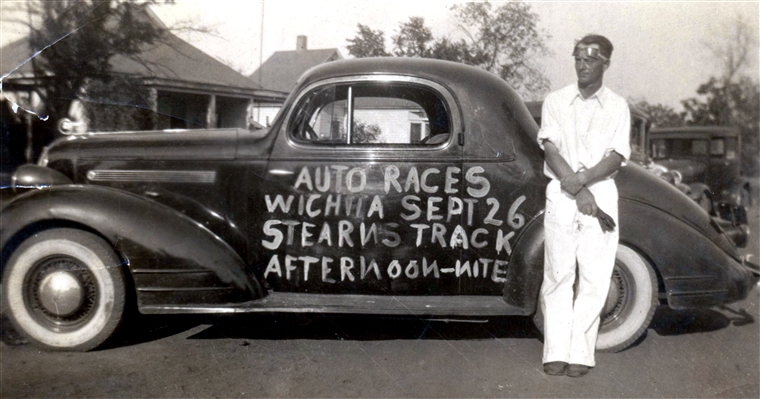 Bill Lehman of Hutchinson, Kansas with his 1935 Pontiac three-window coupe lettered in water based show-card paint to advertise the race that was run on this afternoon.  Lehman entered this car in the race and ran well only to drop out near the halfway point with an undisclosed problem - Lehman collection

Only three cars were running at the completion of this race.

Gatchel received a minor cut on one finger when his car blew out a tire and rolled completely over one time on the 75th lap completely demolishing the car.

Seaman was repeatedly warned for driving in an unsafe manner but he finally settled down and ran a steady race "pushing the leaders hard" until his car lost a rear wheel.

Lehman "ran near the lead" until he dropped out with an undisclosed problem around the halfway point in the race.

Other entries were listed but since only 11 cars started, it is not currently known which ones of these listed below may actually have competed: 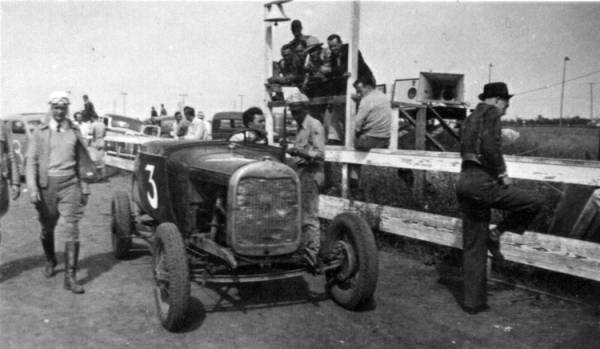 This photograph of Ben Swart in his 1929 Model A Ford roadster was taken on this afternoon at the Bo Stearn's Track.  Swart finished second in the 100-mile stock car race – Photo from the Swart family collection

This photograph was taken on this afternoon at the Bo Stearn's Track and shows Capt. Billy Sink's pace car getting ready to pace the field of stock cars.  The car starting on the pole is a 1929 Model A Ford roadster being driven this day by Ben "Cannonball" Swart of Wichita – Photo from the Swart family collection

This stock car race was promoted by Capt. Billy Sink of Hollywood, California and drew 3,000 spectators.  Sink had worked as a stuntman in movies as well as had traveled throughout the country performing jumps over cars and school busses in a convertible automobile at various venues until he was seriously injured in an accident in 1934.  After that, Sink swapped professions with his business manager.  He continued to travel the country promoting various outlaw auto races while his former business manager, Del O'Neal, performed the stunts.

Del O'Neal would go on to operate the Riverside night club near Columbia, South Carolina and later ran for governor of South Carolina only to lose to Strom Thurmond in the 1946 Democrat primary election.