Herb Ottaway was born in 1912 at Wichita, Kansas and lived on a farm just north of the corner of 29th Street and St. Francis.  When he was 12 years old, he was attending Central Intermediate School on North Emporia Street.  Each evening after school, he rode the bus to 21st and Broadway and then walked the rest of the way home.  While walking north on Broadway one evening, he spotted a 1913 Indian motorcycle leaning against an old house a block west on Market Street.  He tried to find the owner but no one was home.  He returned the next evening to find that the motorcycle belonged to Laff Glatner.  Herb tried to buy it but Mr. Glatner declined to sell saying that he wanted to fix it up instead.  Herb returned the next evening and offered Glatner $12 “which was all the money I had managed to save in my life.”  Glatner told him to get the money so Herb ran home and returned with a large, heavy bag of change.  Glatner took the bag (without even counting the money) and gave Herb the motorcycle.  It wouldn’t run so Herb had to push it all the way home.

Herb’s father had a Harley-Davidson motorcycle himself and was a good mechanic, so he wasn’t that surprised to see Herb pushing a motorcycle into the yard.  His father helped the new owner repair the rusted magneto and get it started.

At 16, Herb started racing Indian motorcycles on Kansas dirt tracks.  He also learned the welding trade and worked in the Wichita aircraft plants of TravelAir (which became Beech Aircraft), Cessna, and Stearman (which became Boeing).

By 1929, Herb was racing a new Indian 101 Scout 45 that he had built for owner and Wichita Indian Motorcycle dealer, “Spec” Tapp.  The engine was a two-cylinder with a stroker flywheel and a barrel valve carburetor.  The 331/32 -inch stroke increased the displacement to 57 cu. in.  It used alcohol for fuel, castor oil for lubrication, and was outfitted with racing wheels and knobby tires.  It had a tube frame and the whole machine weighed only 195 pounds.

In 1930, Herb won the biggest race of his career at Oklahoma City.  The total purse was $600 for a two-day show, which was double what such races normally paid, and that drew riders from coast-to-coast.  Herb won each of his preliminary races, which paid $20 to $25 each.  He then came back the second day to win the feature and collect the $100 grand prize.

In those days, Herb traveled with fellow Wichita rider Frank Chacon (1901-1990) who raced a single-cylinder Indian big valve motorcycle that had been provided by the Indian Motorcycle Co. to Gerald Chance (1898-1969) for the purpose.  Chance was the Indian Motorcycle dealer in Wichita in the 1930s.  It was during this period that Herb raced on the half-mile tracks at Winfield and Arkansas City, Kansas.

By the time Herb retired from racing in the late 1930s, he had raced at Newton, Parsons, Coffeyville, Independence, the Cowley County Fairgrounds in Winfield, Arkansas City Speedway, the “Bo Stearns” track north of Wichita, and the Kansas State Fair at Hutchinson, in addition to his already mentioned venture down to Oklahoma City.  Although he had “flopped” on a few occasions, he managed to escape from the sport uninjured.

With help from fellow motorcycle racer and miniature train builder Max Wilson (1882-1934), Herb had built a miniature live steam locomotive and toured some with it in the 1930s providing rides for children.  The small train was so popular that Herb decided to build a permanent home for it.  That permanent home became the Joyland Amusement Park in Wichita.   So many other amusement parks wanted to purchase his miniature train that Herb, along with his father and a brother founded the Ottaway Amusement Co. in 1940 to manufacture them.  The company produced 89 of the small trains by 1954 when the Ottaways traded the company to Harold Chance in exchange for the steam train ride Chance owned and operated at Joyland.  Under Chance’s leadership, Ottaway Amusement Co. became Chance Manufacturing Co. and branched out into building various carnival rides.

Several years ago, Herb purchased the original motorcycle he had competed on from “Spec” Tapp and completely restored it.

After retiring, Herb made his home in Wichita until he passed away on February 5, 2004. 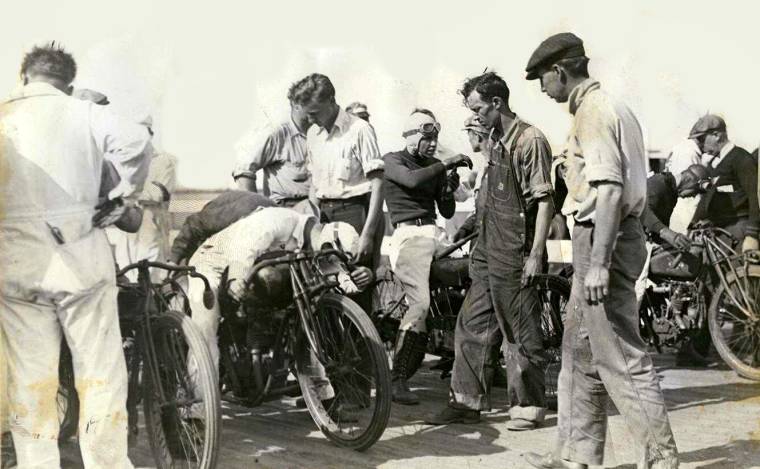 Herb Ottaway is shown here in October of 2001 with an Excelsior Twin Super X that he occasionally raced on dirt flat tracks nearly 70 years earlier.  It is also believed to be the same motorcycle that Herb is seated on in the second photo above - Bob Lawrence photo