This rather poor quality picture was taken of the races at the JayCee Speedway on this dusty afternoon.  The drivers have yet to be identified - Larned Tiller and Toiler newspaper 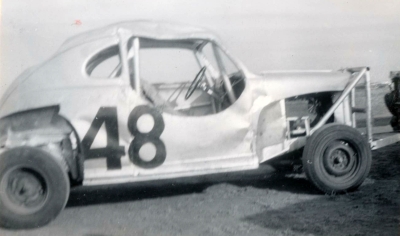 This car was owned by Andy Clarkson of Larned and driven on this day by Clarence "Nut" Cokeley.  Cokeley timed the car in 12th fastest in time trials turning the quarter-mile racetrack in 22.58 seconds.   Cokeley started in the inside of the second row in the second heat race but rolled the car on the north side of the racetrack on the second lap.  The race was halted to clear the wreckage.  Cokeley's crew changed a tire and returned to finish in second place right in front of  Leland Salmans.  Cokeley then parked the car for the remainder of the events that day and relieved Ron Decker in car #38 instead - Cokeley collection

This photo was taken on this afternoon at JayCee Speedway at Larned.  The car was a 1934 Chevrolet six-cylinder jalopy that weighed 2,250 lbs.  It was owned by Bob Robbins and Virgil McNeil both of Larned and sponsored by the Robbins Chevrolet dealership in Larned.  Ron Decker of Larned timed the car in 14th fastest in time trials turning the quarter-mile racetrack in 22.70 seconds.  Decker then won the second heat race.  In the trophy dash, Decker was clipped by another car and rolled in what was described as the worst crash of the day.  Decker was uninjured but was taken to the Larned hospital for observation.  Clarence "Nut" Cokeley of Liberal, Kansas drove the car in the rest of the races that it was entered in this afternoon but he could only manage a fifth place finish in the first semi-final race and then he spun the car out in the B feature - Cokeley collection