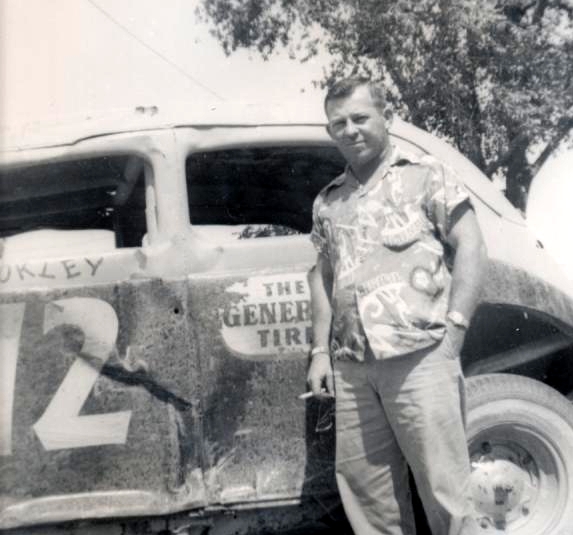 This photo of Nut Cokeley and his jalopy was taken earlier in the day as he prepared to leave his home in Liberal, Kansas for the races in Larned - Cokeley collection

This photo was taken as the cars were lined up to start the first semi-final race on this afternoon at the JayCee Speedway.  To the right of this photo and completely out of the frame are the pole position car, #40 driven by Scott Talbert, Sr. and the outside front row starter, #46 driven by Kenny Burnett.  The two cars at right in this photo, with only the back halves of their cars showing, are the second row starters, # 61 Fred Suchy on the inside and #26 Bob Salem on the outside.  The third row starters are ##77A Norman McCaslin and #85 Bill Roach.  The fourth row starters are  #2 Glenn Morrison and #78 (yes, the #77 had been altered to be a #78 for the afternoon) Bill Stauth*.  The fifth row starters are #79 Dean Lewis on the inside and #88 Jack Culver on the outside.  There were five more cars in the lineup starting behind the fifth row and outside of this photo - Stan Morrison collection

One of the many crashes at the JayCee Speedway on this afternoon.  The only car that has been identified here to date is the #30 driven by Johnny Thomas of Ashland, Kansas at left.  It is a little difficult to see in this photo but there is a car laying on its side at the right side of this picture - Tiller & Toiler

* Bill Stauth is listed as the driver of this car in the races on this afternoon in records independently compiled on this day by Dorothy (Mrs. Nut) Cokeley and Elsie (Mrs. Dutch) Davis.  Stauth family and friends who knew both men however, believe that the driver was more likely Bill Stauth's brother, Dale Stauth, who was also from Dodge City, Kansas.  Bill Stauth is said to not have been particularly fond of auto racing and, if he actually did drive the car in these races, it would be the only known time that he ever competed in any such event while Dale Stauth did compete in several auto races around this time period.