The First Day of Racing at the

This photo of Leland Salmans with his first stock car was taken in the pit at the JayCee Speedway at Larned, Kansas before he rolled it in the B feature later on this afternoon.  The car was a 1932 Ford 5-window coupe - Leland Salmans collection 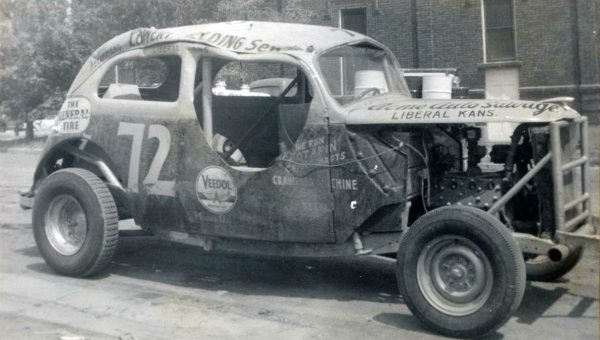 Nut Cokeley's Ford the day after these races and after he had rolled it in the east turn on the first lap of the first heat race at Larned thus becoming the first driver to roll his car in competition at the brand new facility and track management gave him $5 for the feat.  It was also Cokeley's first time to roll a jalopy but it was not to be his last - Cokeley collection

This photo appeared in the Great Bend Tribune on May 28, 1956 with a caption saying that it was taken during the first heat race on this afternoon at Larned.  Visible in the photo is a white car #25 driven by Tom Price of Hutchinson, Kansas running in third place and car #79 in fourth place that was driven by Dean Lewis of Dighton.  Since neither of these two cars competed in the first heat race, it is more likely this photo was taken during "hot laps" a.k.a. "warm-up laps" before the races began.  The car at far right in this photo can also been seen in the photo at the bottom of this page but its driver has yet to be identified - Great Bend Tribune

Trophy dash winner John McGee of Great Bend, Kansas receiving a kiss from trophy girl Janyce Hiett of Larned, Kansas after she had presented him with the trophy.  Starter Ben Hughes of Dodge City looks on at left - Tiller and Toiler

John McGee of Wichita, Kansas is shown here leading one of the races in the Rebein brothers owned red #11 Ford coupe on this afternoon at the JayCee Speedway.  The man standing at left is Gene Potts of Great Bend, Kansas who would go on to win several races on this racetrack over the next four year - Leland Salmans collection

* This was the only day of racing on the new 3/8 mile oval as the racetrack was shortened to 1/4 mile by the nest race date.  Therefore, the times set on this day were track records never to be broken on this 3/8 mile racetrack.

** This driver may have been Pete Morrison rather than Glenn Morrison.