This photo of Leland and his first stock car was taken at the JayCee Speedway at Larned, Kansas on Sunday afternoon, May 27, 1956.  The car was a 1932 Ford 5-window coupe. 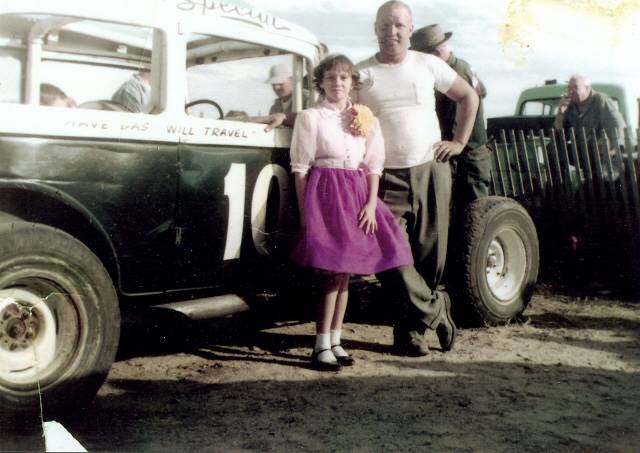 This photo of Leland Salmans and the #10 car was taken in the pit at Larned, Kansas.  The car is a 1932 Essex Terraplane powered by a 1948 Hudson 262 cubic inch Hudson flat 6 engine.  At the time this was taken, the car was owned by Richard W. Daughtery of Great Bend, Kansas.  Leland began driving this car in May of 1958 and continued to do so through the 1959 racing season.  Leland took second place in this car in Jack Merrick’s racing circuit in 1958 before winning that points championship in 1959.  The car now belongs to Leland’s brother, Alan Salmans who has restored it back to how it looked in the late 1950s.  The trophy girl in the photo was the daughter of R. D. Gatton, a mechanic who helped build the car.

Leland Salmans at left with the Richard Dougherty owned Hudson in 1958.

This photo of the Richard W. Dougherty owned Hudson was taken after a race at the Mohawk Speedway at Hutchinson, Kansas either late in 1959.

The Hudson when Alan Salmans rediscovered it in the early 2000s.

The Hudson when Alan Salmans rediscovered it in the early 2000s.

The Hudson under restoration

Leland Salmans at left with his brother, Alan Salmans